Arrived at Jakarta’s Terminal 3 where all the non-budget carriers international flights depart from at around 10:45pm. There was no queue at check in with only a couple of passengers checking in on the Economy class side. Staff was quick in checking my Visas and I was able to leave my checked ski bags by the counter easily. No priority security screening for Etihad Business class since it is just for Sky Priority members in Jakarta but there was not a queue either so I passed by security quickly and surprisingly the auto-gates for immigration works that night.

Lounge access provided at Plaza Premium Lounge next to the gate. However by the time I reached the gate, boarding just started. So no time for the lounge this time as I head straight to the Priority queue for Business class and onto the plane. The plane today had the special ‘Choose China’ livery but because it was dark out, I had no chance to capture the whole plane.

Only one door was used for access so Business Class passengers do not get their own doorway. Crew took a bit of time to check my boarding pass as I was the 3rd passenger to board the aircraft. Inside the cabin was very nice onboard Etihad with a variation of the staggered 1-2-1 seating system with alternating rows facing back and forwards. All the seats by the windows face forwards while the middle seats for couples also face forwards. Aisle seats face backwards.

The seats are upholstered in fine Poltrona Frau leather in a brown colour and there was a nice light beside the seat with neat details. Cabin lights were quite dim during the late night boarding.

On the seat, there was a pillow while the blanket was placed on the footrest. The menu was also placed over the blanket. On the ledge space, passengers can find the Acqua di Parma amenity kit.

The amenity kit pouch provided is not bad since it can be re-used as a desk valet and the leather was nice to the touch. Inside the amenity kit there was the Acqua di Parma cologne and hand cream, along with socks, eye shades, toothbrush and a small tube of toothpaste. What I found lacking was a lip balm.

Welcome drink choices of champagne, water or orange juice offered. Stewardess on the flight were not friendly at all as they just placed hot towels on the side.

Meal orders taken on the ground by the steward who offered post take off drinks and breakfast. Unfortunately the lemon and mint is offered only out of Abu Dhabi. The steward instead offered the peach bellini for the post take-off beverage.

The food and beverage menu for this flight is as follow: 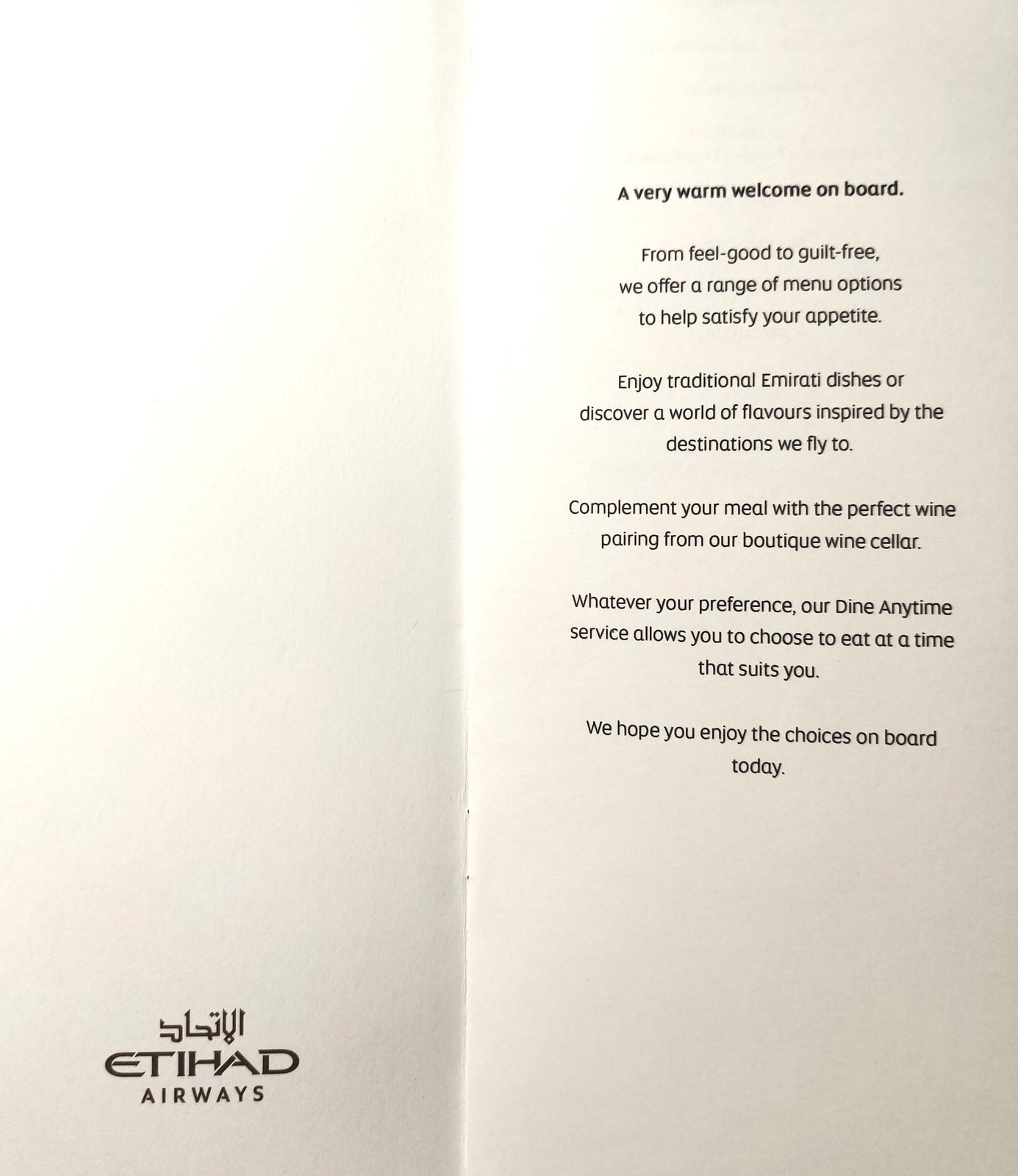 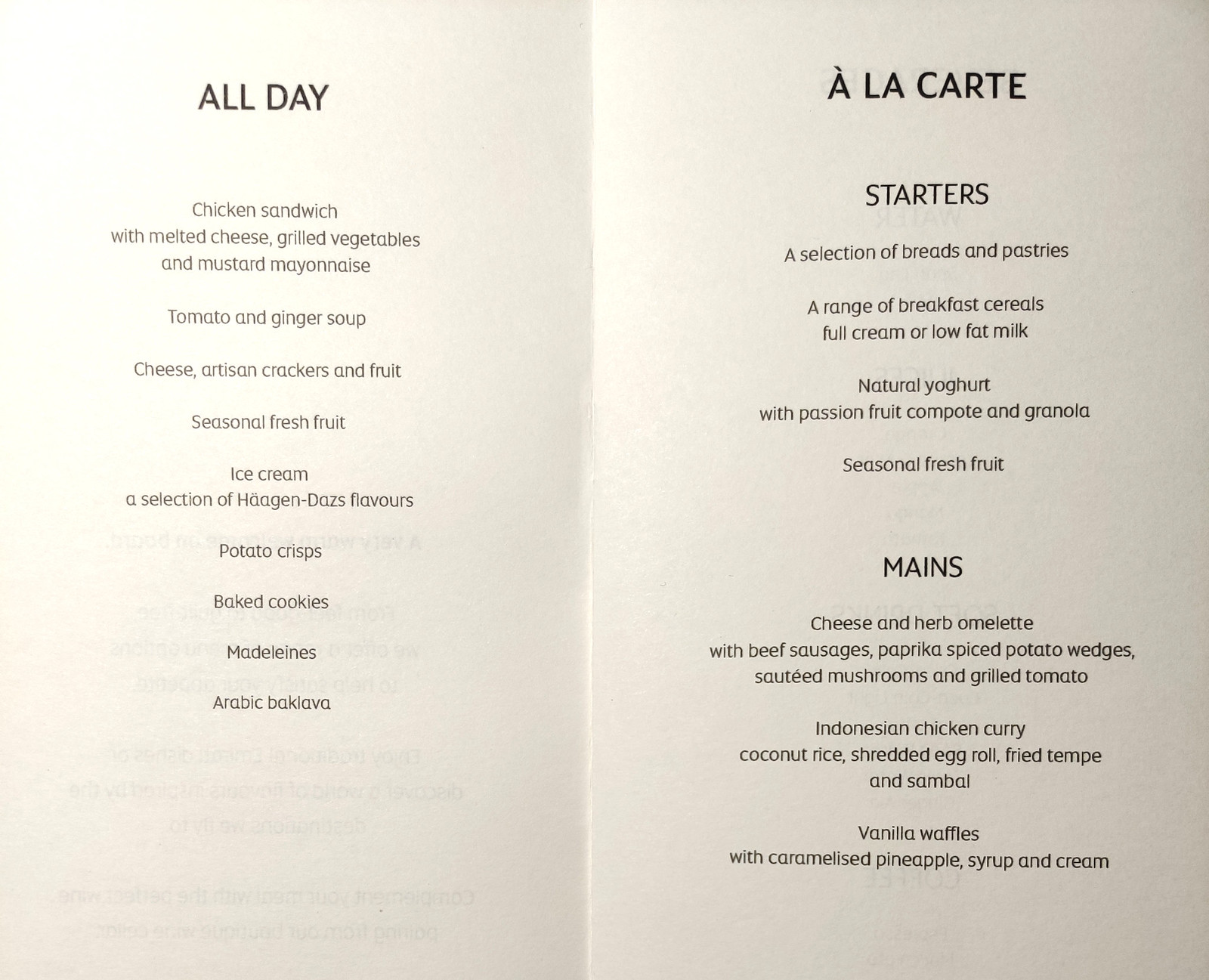 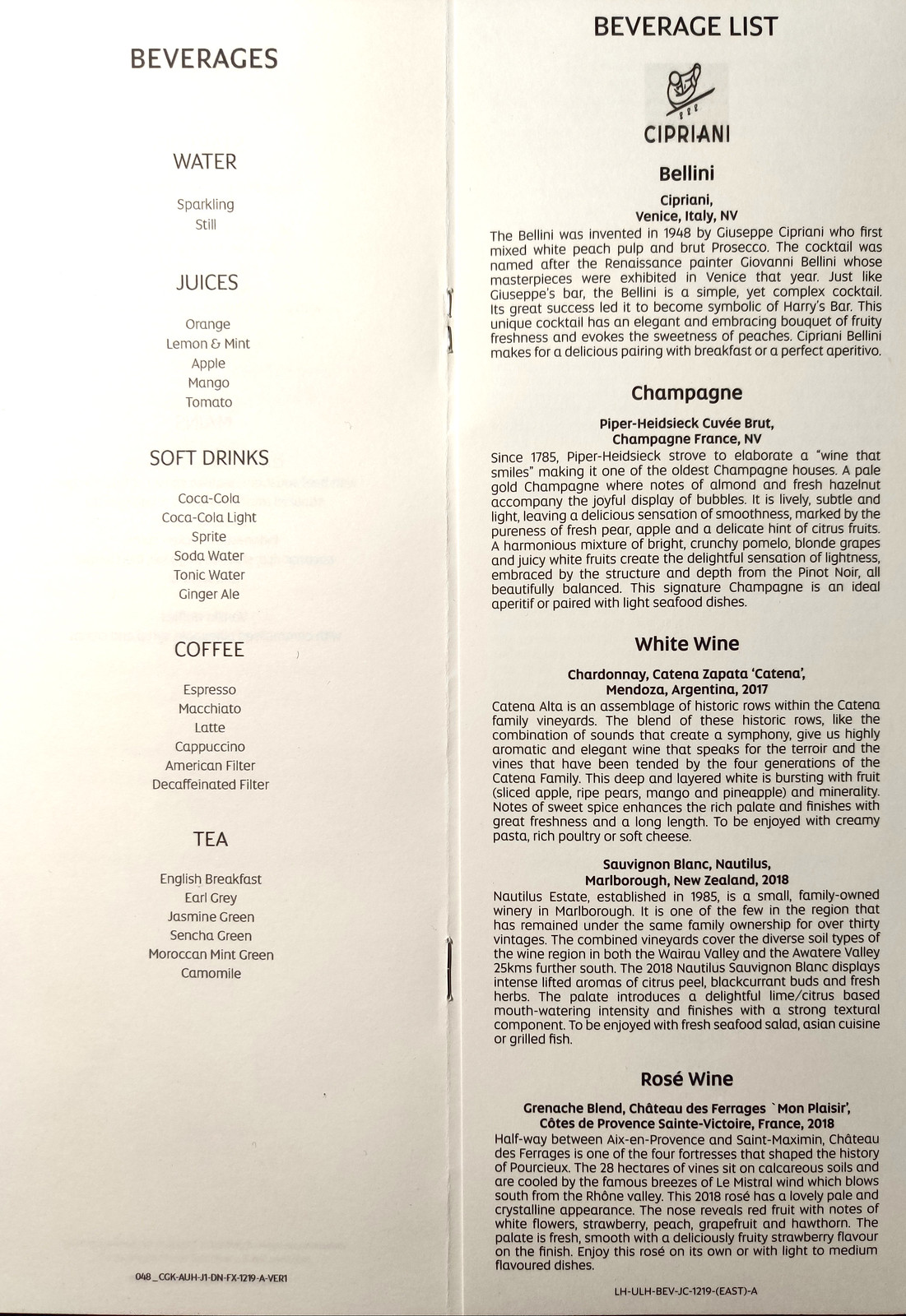 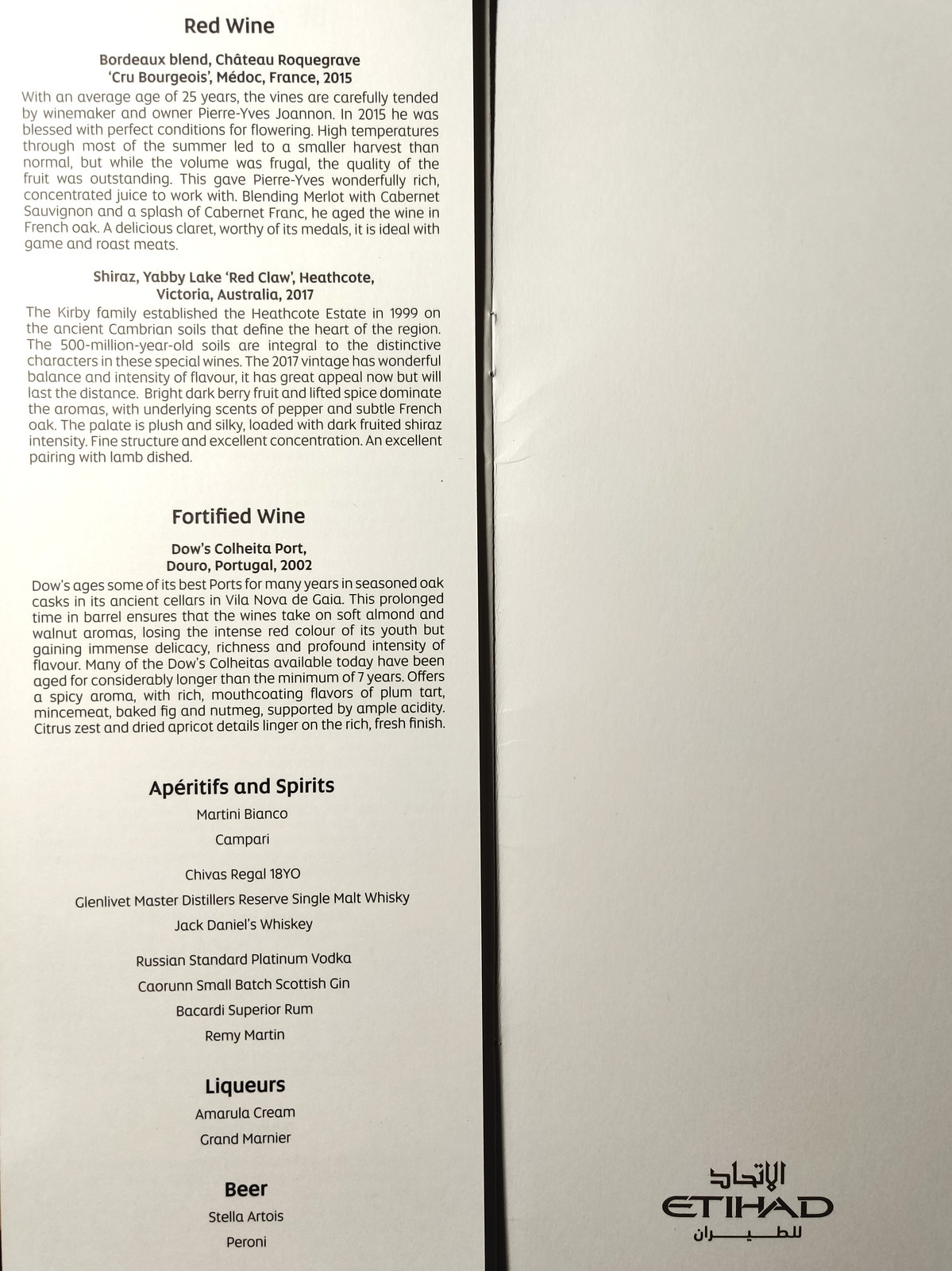 Headphones can be found on the storage space that is well segmented with a section for smaller items like spectacles or wallets. A bottle of mineral water can also be found in the space.

For the inflight entertainment, the screen is modern with high definition resolution, making watching movies a joy. There was also a touch screen remote control which I liked since it allowed me to track the flight while watching the movie. Next to the inflight entertainment remote, there was another touch screen panel to control the lights around the seat along with the seat recline with the massage function.

There was another one-touch controller below the ledge for the reading lights, cushion firmness and to move the seat to a full flat mode or for take-off/landing.

Boarding was quick and the Business cabin had several families so it was quite full. Pullback was punctual at 23:52 and the safety video was shown thereafter in Arabic and Indonesian. An Islamic prayer was recited after the safety video. From there, a smooth take off on the 787 marked a great start to the flight plus we took off on time with fine weather.

After take off, I went to the lavatory and while small, it was clean. Acqua di Parma hand lotion is provided along with soap and a dry hand cleanser.

Returning to my seat, my Bellini was already served with a ramekin of almonds and cashew. A glass of water was also included since I had requested for that as well.

I started watching Lion King and requested for some ice cream and potato crisps since I wanted some snacks before sleeping. The tray table was deployed for the late night snack complete with the tablecloth.

After finishing the snack, I went to brush up and change to my pyjamas to get ready to sleep. The seat turns to a full flat bed and through the forward-reverse staggered arrangement, the footwell was spacious on the recline. Etihad also provides a soft blanket that I used as a mattress pad. It was already 1:50am when I head to sleep but I had a good sleep since the temperature of the cabin was just right.

Managed to have a 3 hour nap and woke up at 5:05am CGK time and as I tried to get back to sleep, there was some heavy turbulence. The turbulence continued but it got better and I managed to continue sleeping until one of the cabin crew nudged me awake for breakfast. The female cabin crew were definitely much better on this flight and I went to change before returning to my seat, noting that I was served the mains for breakfast immediately. And it was the cheese omlette when I had ordered the chicken curry.

I called the cabin crew from the seat since they are usually absent from the cabin unless attending to passenger’s needs. In addition to mentioning the error in my breakfast order, I requested for some fruits to be served first. The fruit plate consists of papaya, pineapple, watermelon, grapefruit and red dragonfruit.

Service is quite slow as only the female crew seems to be working to attend to the packed cabin. The male steward was absent throughout aside during the boarding phase. Thus I was left waiting to receive my main course. I do have to note the chicken curry main course was tasty and the crew offered bread from the basket in between the meals. However my request for an additional bottle of water after the meal was forgotten.

The crew could have forgotten due to our early descent into Abu Dhabi as we started our descent about 4:18am local time. For some reason the inflight entertainment was stopped to show an advertisement about Abu Dhabi. Fast track immigration cards were then distributed by the crew.

A smooth flight and punctual departure meant we arrived in Abu Dhabi earlier than scheduled with the sky still dark. No queue on the direct approach at this hour of the day and we landed safely at 4:46 am local time. Welcome message by the crew in Arabic, English and Indonesian though this seems the only time during the flight Indonesian was used.

As a smaller airport than Dubai, the taxi to the gate was quick and we docked by the gate by 4:54am. It was an easy walk through immigration with no queue since more passengers were transiting. However my luggage took a while to come out even with the priority tags while there was others that had lost luggage as well. In this respect Etihad certainly needs improvement.

For my first long haul flight onboard Etihad, I do like their Business class cabin since it was nicely outfitted and has a updated staggered configuration that makes it comfortable even in a full lie-flat position. The meals, entertainment options and amenities onboard was up to standard for a world class airline, but the service has room for improvement. Given that they have lower prices than the competition, I would recommend flying with them if the schedule works.