After spending nearly a week in Shanghai for business meetings, I made my way back home redeeming a one way flight with Singapore Airlines. With multiple flights a day between Singapore and Shanghai, they are one of the easiest airlines to redeem miles for a flight to and from Shanghai. Since I was connecting through Singapore, I had to take the earliest flight which meant an early wake-up call. Fortunately, a relative of mine dropped me off at the Terminal 2 drop off and I head straight to the check-in counter with plenty of time to spare.

With no queues in Business class, I was able to get my boarding pass easily. Service in Asia is always great as I was able to leave my ski bag just by the side as the check-in agent mentioned someone will bring it over to the odd-sized area.

With that settled, I quickly head towards passport control and security which took up the most time during my journey to the lounge. Both took me in excess of 30 minutes though I still had more than enough time to spare in the lounge. Singapore Airlines uses the Air China lounge which has directions that was easy to follow towards the second floor.

The Air China Business and First Class lounge is located away from the main terminal and is connected by a walkway. There was then a large foyer where there was a reception desk and a huge giant panda statue by the side to welcome guests.

After a quick check of my boarding pass, I was directed to the right doorway since the left side is for the First Class lounge. This is a fairly large lounge spread over 2 floors and there was a plan of the lounge by the entrance.

Upon entering the lounge, there is a room with luggage storage lockers. These lockers have keys but I would have preferred some kind of code-operated lockers where guests could set their own personal code to lock the storage cabinet.

Past the locker area, there was a pair of escalators in the centre of the lounge with seating arranged on both sides of the escalators. The right side of the escalator has windows overlooking the courtyard and there are natural light in the day for guests who wants a brighter ambience. There is also a kiosk where guests can scan their boarding passes to obtain the wifi password.

By the wall, there are armchairs set facing each other, and this area has dim lighting for guests to relax. Guests travelling with a partner can use this space since the seats are clearly set for couples.

At the back of the escalator, there is a special seating area with armchairs arranged around a circle. This provides more space for individual travellers using this space. 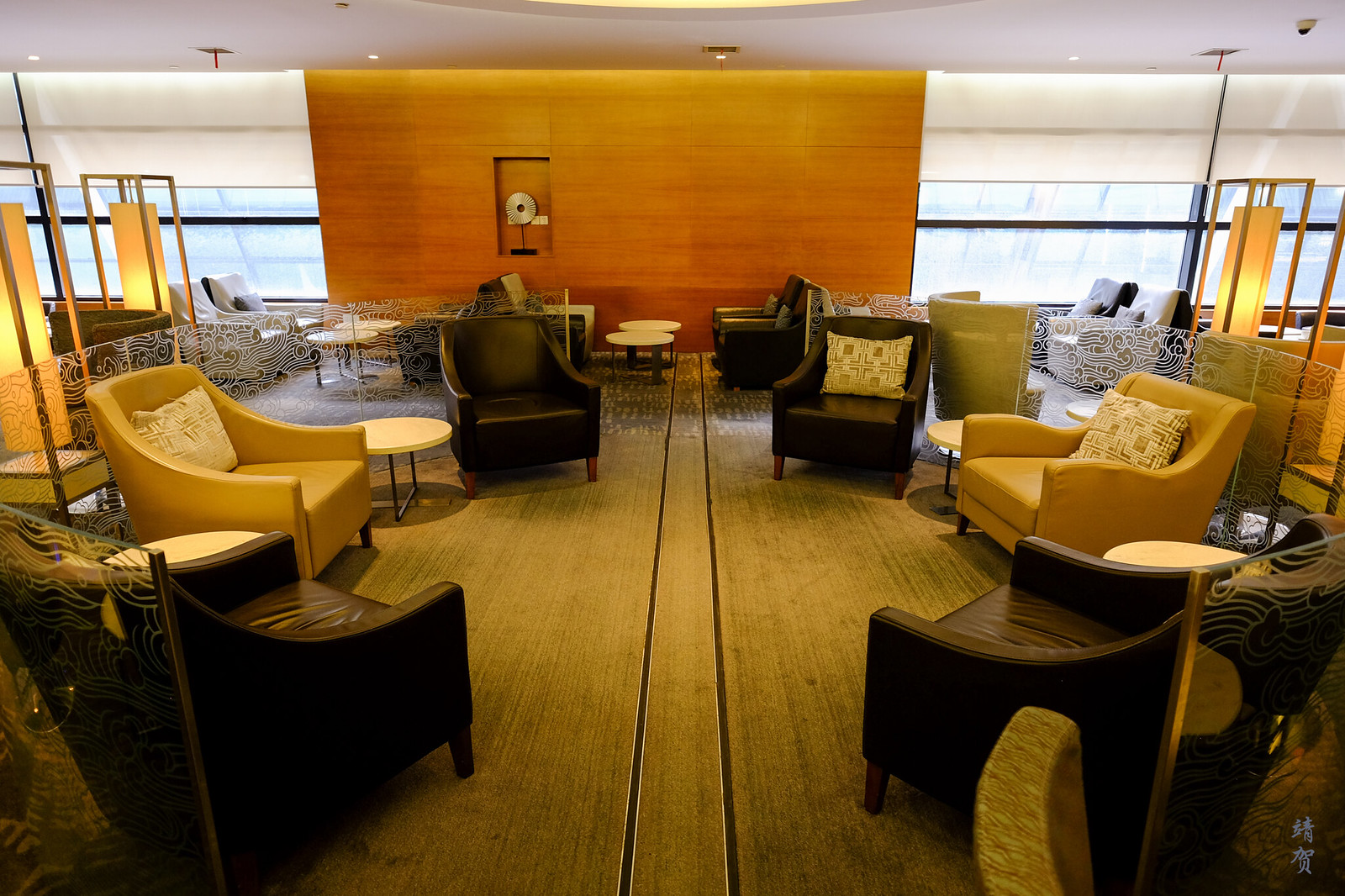 Armchairs arranged around a circle[/caption]

Complementing the circular seating area, there was a circular bar counter with bar stools and tall tables around it. In addition to liquors, there was wine and an espresso machine so guests could also order specialty coffee here from the staff manning the bar.

Aside from the bar area, there was a shelf filled with newspapers and some magazines on the first floor. There were English publications like New York Times and Financial Times so it was stocked for the international traveller.

Next to the magazine shelf, there was a large beverage fridge that is filled with cans of beer, soft drinks, bottled water and some yoghurt drinks at the lower right corner.

Lined by the wall next to escalator was another shelf stocked with magazines and newspapers.

Armchairs are placed on both sides of the shelving rack and these are some of the brightest section of the lounge with plenty of daylight streaming into the lounge from the windows.

Occupying most of the second floor was the buffet space and dining areas. They are arranged over a circular section on the left side of the escalator. There are bench seating in the inner circle area facing the buffet console while there are taller bar tables and stools on the outer area.

Food & Beverage in the Lounge

The lounge was serving breakfast since it was still early in the morning of my visit. As usual, there was common food items like bread, muffins and toast.

Alongside the muffins, there was sweeter and heavier pastries like banana cakes, chocolate mousse and yellow peach mousse cakes.

A salad bar was available for healthier options, with honeydew and watermelon being the cut fruits served. There was also pot of green bean (mung bean) soup which is commonly found in Asia.

Other Asian specialties includes white fungus broth which is common in Chinese cuisine. There was also steamed corn and a variety of dim sum in bamboo baskets.

Vegetarians would be pleased in this lounge since on top of the salad bar, there was vegetable buns amongst the dim sum served. There was also stir-fried green vegetables in soy sauce.

More common western-style lounge food in the lounge were bacon, beef sausages and hard boiled eggs. Though I have to note the bacon did not look appetizing.

If hard boiled eggs are not to your liking, there was sunny side up which I very much prefer. This was plated individually and not made to order, with the plates being placed alongside scallion pancakes which is a Chinese breakfast favourite. Found in the same corner was bowls of soup noodles and sesame balls.

Next to this corner there was plenty of toppings like chilli, sesame oil, soy sauce, coriander, dried seaweed and peanuts for the noodles.

Instant noodles can be found with tea bags beside the hot water dispenser. An espresso machine is also available along with several juices and milk from the dispenser.

Wines were available for self-pour in the buffet here though it was too early for a drink so I passed on those.

The mainly Chinese dishes served in the buffet was great for me as I like Asian cuisine and I had a decent breakfast in the lounge prior to my flight. Thus I would rate the food in this lounge to be quite good and probably better than what I experienced in the Cathay Pacific lounge in the same terminal.

Shower facilities were to be found at the end of the lounge. There was another reception desk at the end with a staff member on hand to assist travellers’ requests. There was also some seating outside the four shower rooms for guests who need to wait for one during peak operating hours. Since this area was further away, it also tends to be quieter.

The private shower rooms here were very nice as they are bright and clean. Amenities like towels and slippers were provided in the shower room and they have their own toilet. The shower space features both a rain shower head and a hand-held one, thus the facility is as good as any other lounge I have been to.

In between the dining space and the shower facilities, there was two TV viewing areas in the lounge that had comfortable armchairs. These semi-circular areas are pretty nice to spend longer transit times since the armchairs have small side tables to place your snacks and beverages.

There was also a room with plenty of workstations for guests who need to use the computer to go online. A printer is also available for use in the business centre.

Another luggage storage locker room can also be found in the second storey of the lounge.

Overall, Air China operates a pretty nice lounge in Shanghai Pudong, and it was way better than their Business Class lounge which I experienced a couple of years ago. I would consider this lounge to be on par with many other airlines’ lounges in their home country. For Star Alliance members, this was a good lounge to spend some time in, though Terminal 2 in Shanghai Pudong is not a bad airport terminal either.