Now it is time to get on with another highlight, since flying on Lufthansa First always gets me excited! The assigned gate E08 was fairly far from the lounge but upon reaching security I was escorted to the front and brought to boarding which occurred on-time as stated in the boarding pass.

Boarding the elegant cabin in the A380 was always a pleasure. Even though Lufthansa did nothing to its cabin since I flew it a couple of years back, it still looks looks good!

Onboard the crew was in a festive mood wearing hats and greeting happy new year to guests. I was the second guest to reach the cabin and found my seat easily in this cabin with just 8 seats. Located on the upper deck of the A380, the front section of the cabin lies the 2 lavatories and the stairs to the lower deck while the back of the cabin was the storage lockers and the galley. I generally prefer the second row seats further from the lavatory though there are really no bad seats in this cabin.

Luggage was stored in the lockers giving a very spacious front cabin with no overhead bins. A crew member initially asked if I was familiar with the cabin but upon seeing I found my locker, she left me alone. This is how Lufthansa’s crews generally are – professional and discrete. The seats themselves are not as wide as Cathay Pacific or Singapore Airlines but they are supple and has very nice leather armrests on both sides that hides the seat and entertainment controls.

On the seat itself, there was already a pillow with the headphones stored in the compartment next to the seat.

Aside from the headphone storage compartment, there was a larger compartment that can comfortably hold a laptop and the provided amenity kit. At the end of the armrest on the right there was an open bottle holder since bottled mineral water is always provided after meal service.

Macadamia nuts was served while I was asked if I wanted champagne. Each passenger was attended to before the crew moved onto serving the next passenger that has settled down. This made for a very solid service at the start of the flight.

Next the purser offered pyjamas and brought out an M size with the new Jacob Jensen amenity kits along with a pair of slippers.

While there was no Rimowa kits to be found, the contents of the kit are still similar with La Prairie amenities, a foldable comb, a dental kit with mints, a pair of socks, eyeshades, shoehorn and ear plugs.

The other crew member spent some time chatting with the passenger in 1K before handing out menus. Empty champagne glasses were refilled along the boarding process, though passengers could certainly help themselves as the champagne is set up in the front of the cabin.

Cabin was 6 out of 8 filled by the time the doors closed. Captain came onboard to announce our flight time of 12 hours and 30 minutes with the crew welcoming guests onboard in German first before English.

Pullback started at 12:09am and it was a fairly long and slow taxi to the runway with the cabin lights dimmed. After a smooth take off, I started watching Kung Fu Yoga starring Jackie Chan.

Hot towels and amuse bouche was served once we reached cruising altitude. Lufthansa uses a nice fragrance on its hot towels which is a nice touch and differentiates it from the normal towels in Business Class cabins. A beverage of choice was also served to guests before the meal service.

Meal orders were taken after the amuse bouche and drinks were served. An inflight wifi voucher was also distributed to passengers in First Class and the wifi was actually useful for WhatsApp and using apps like Instagram and light surfing of websites. 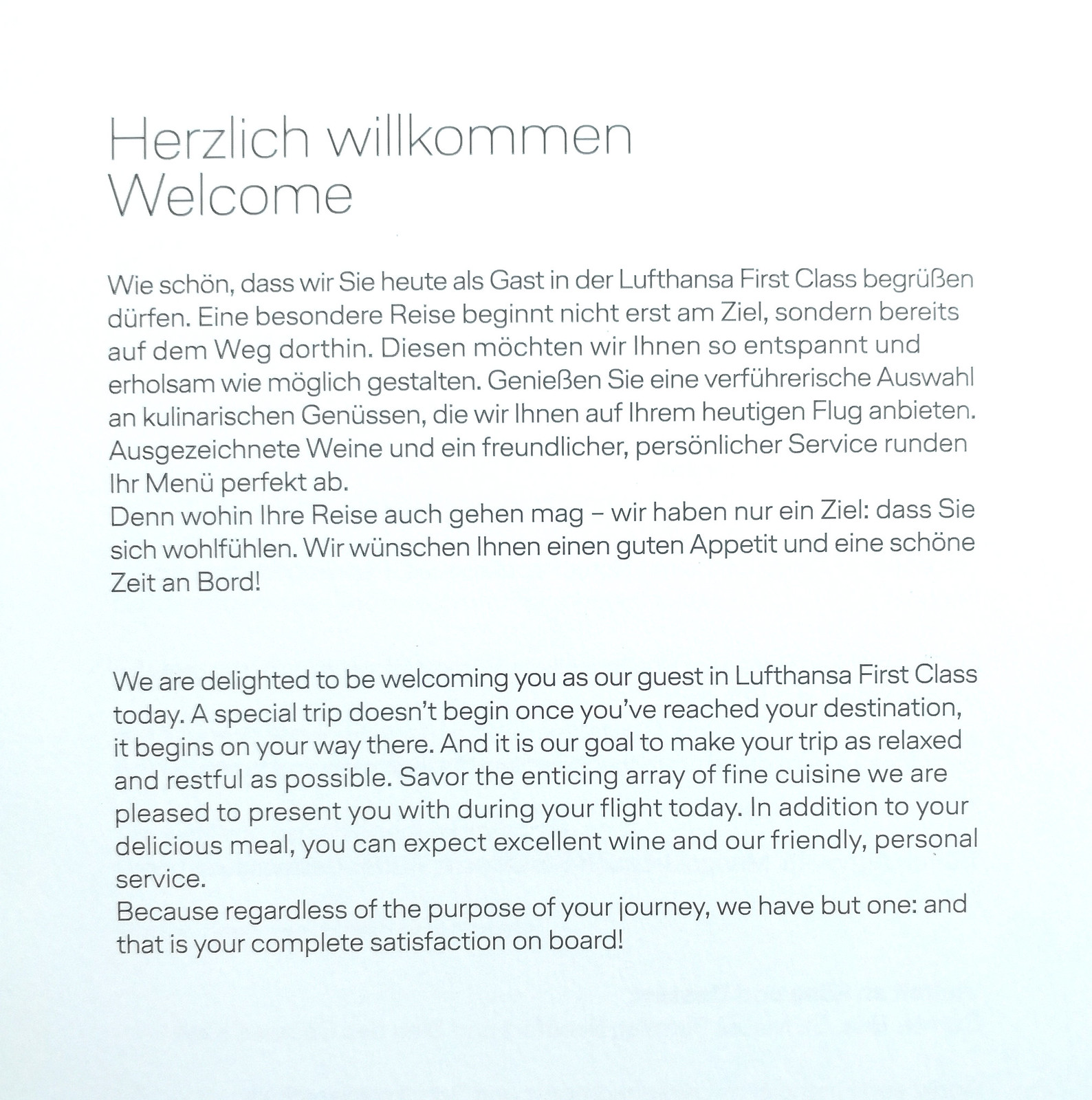 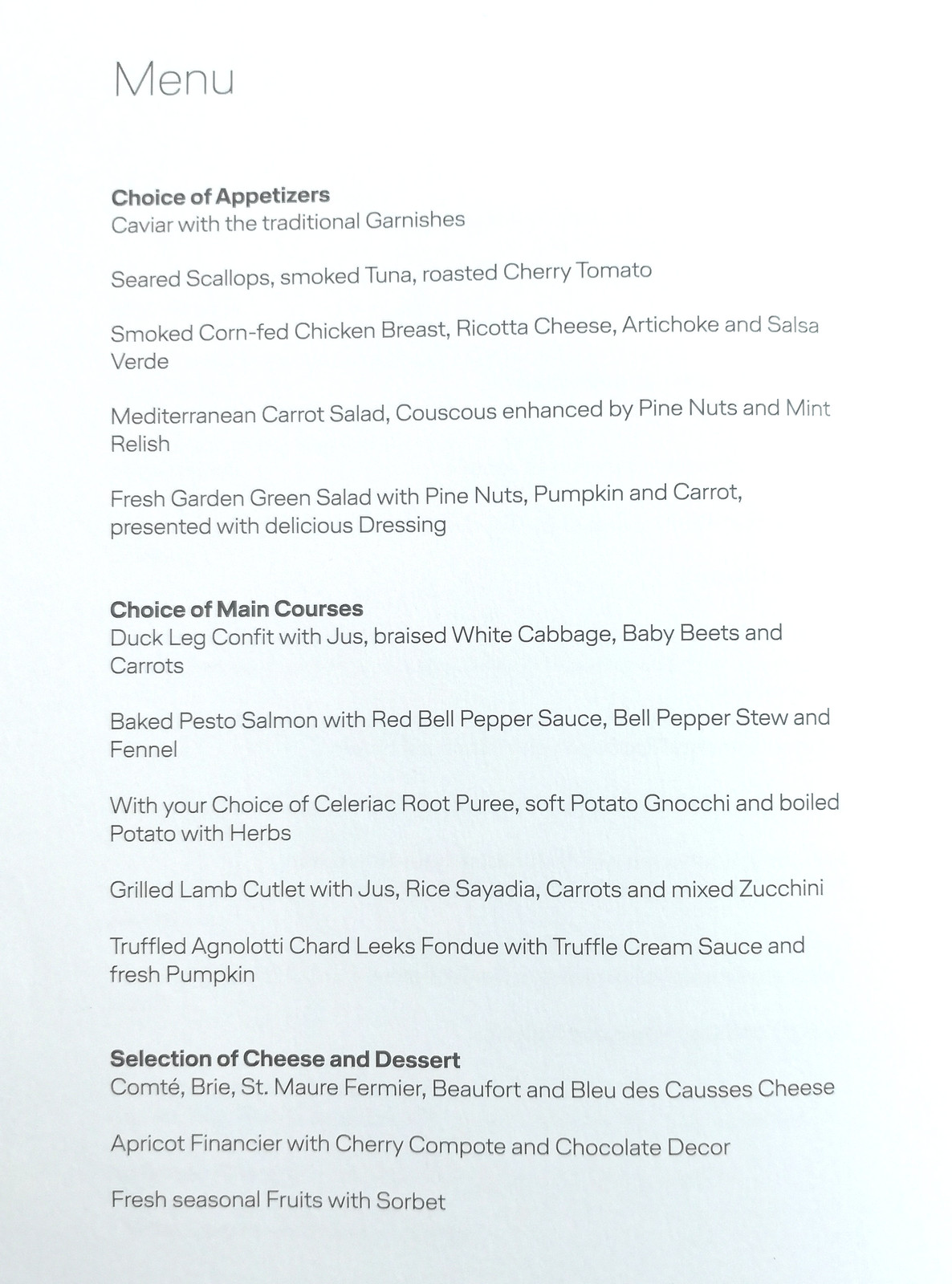 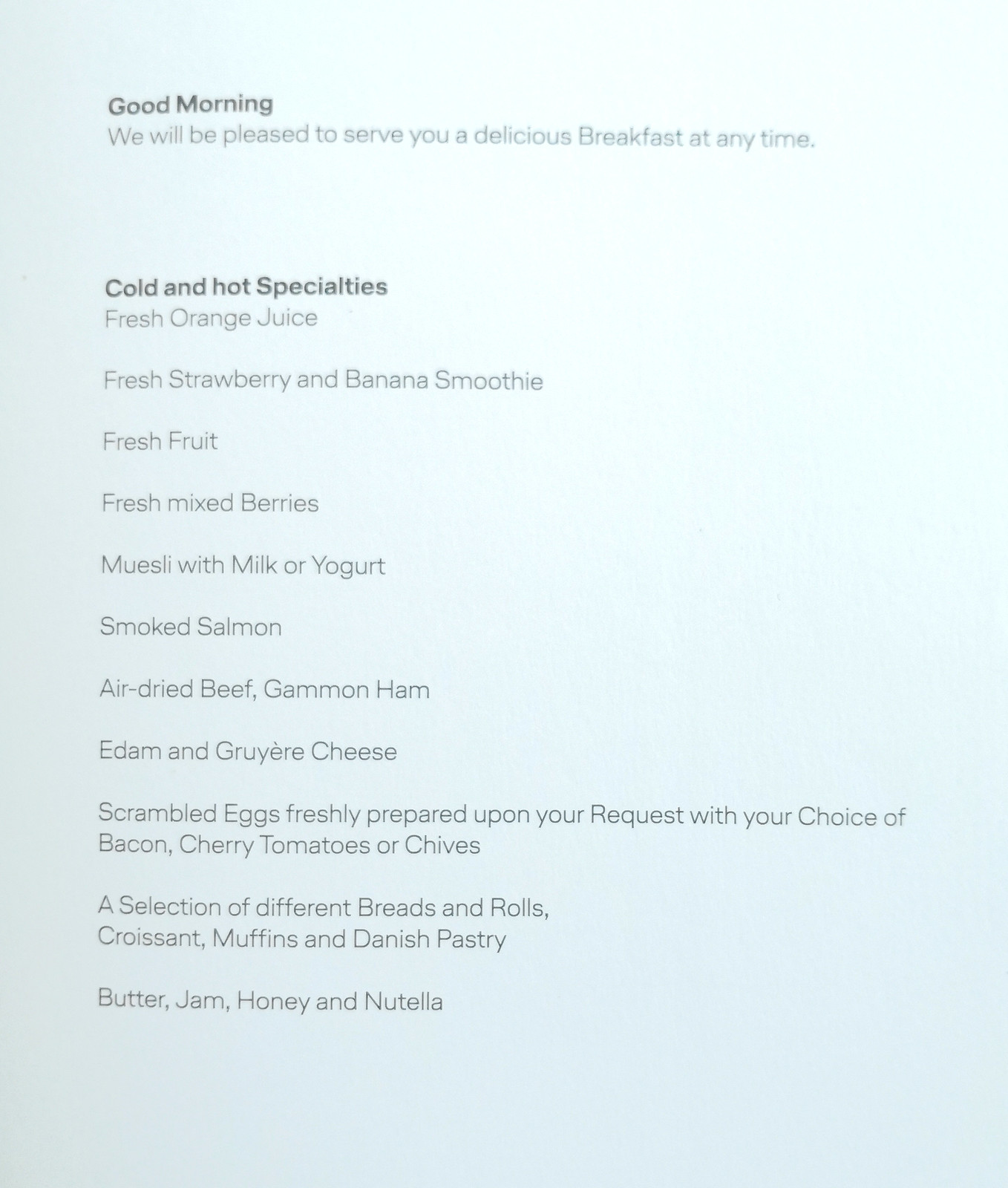 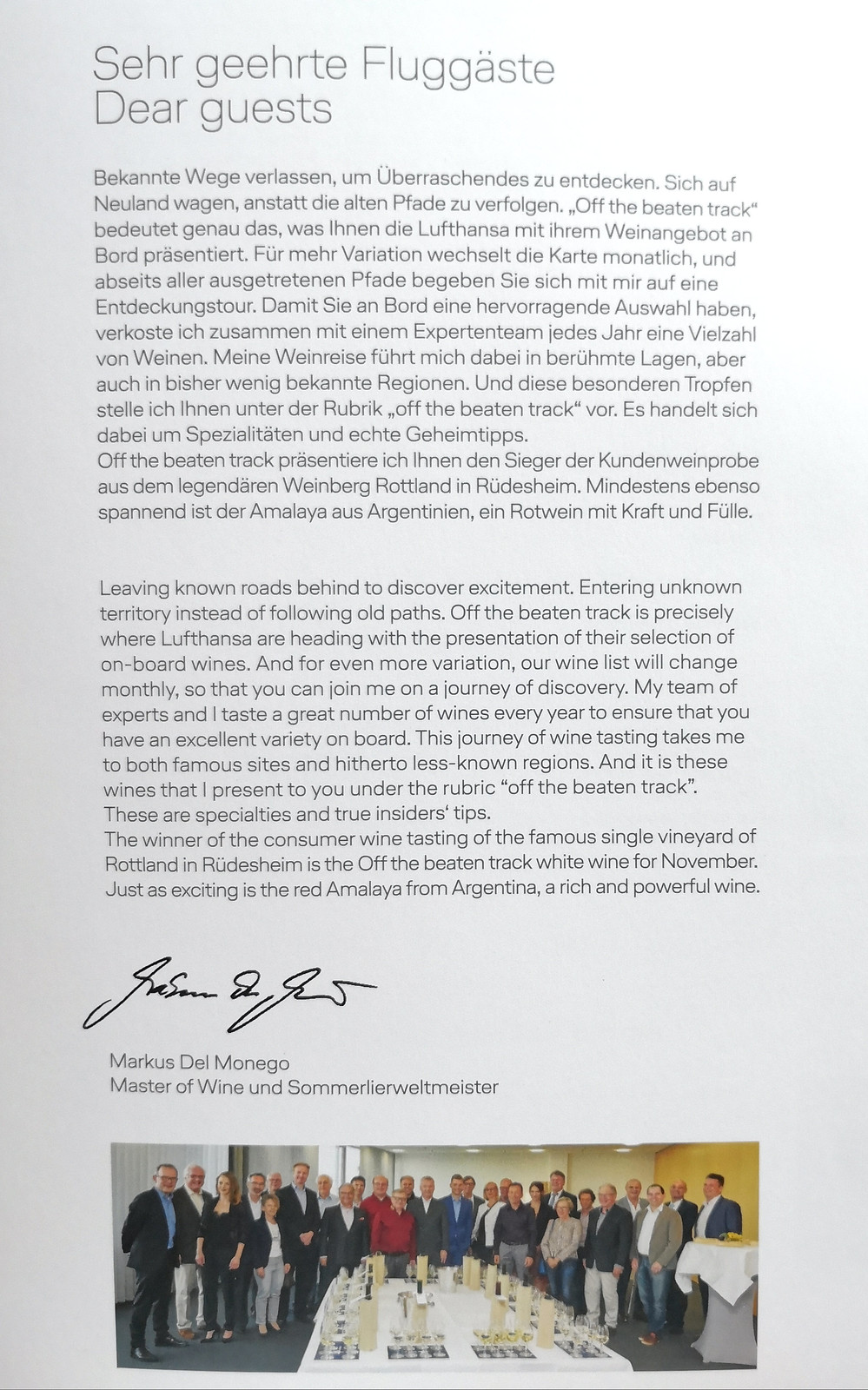 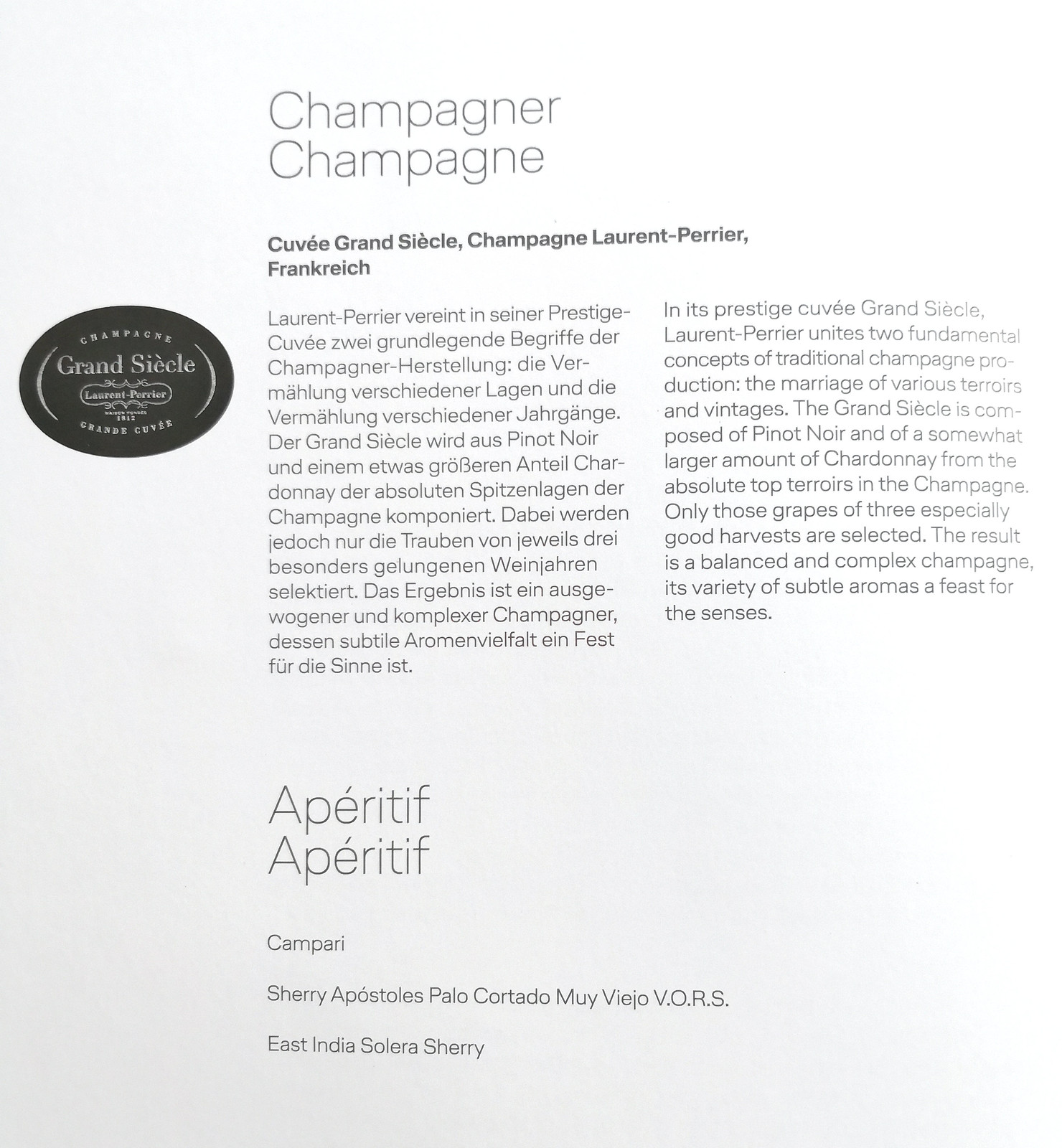 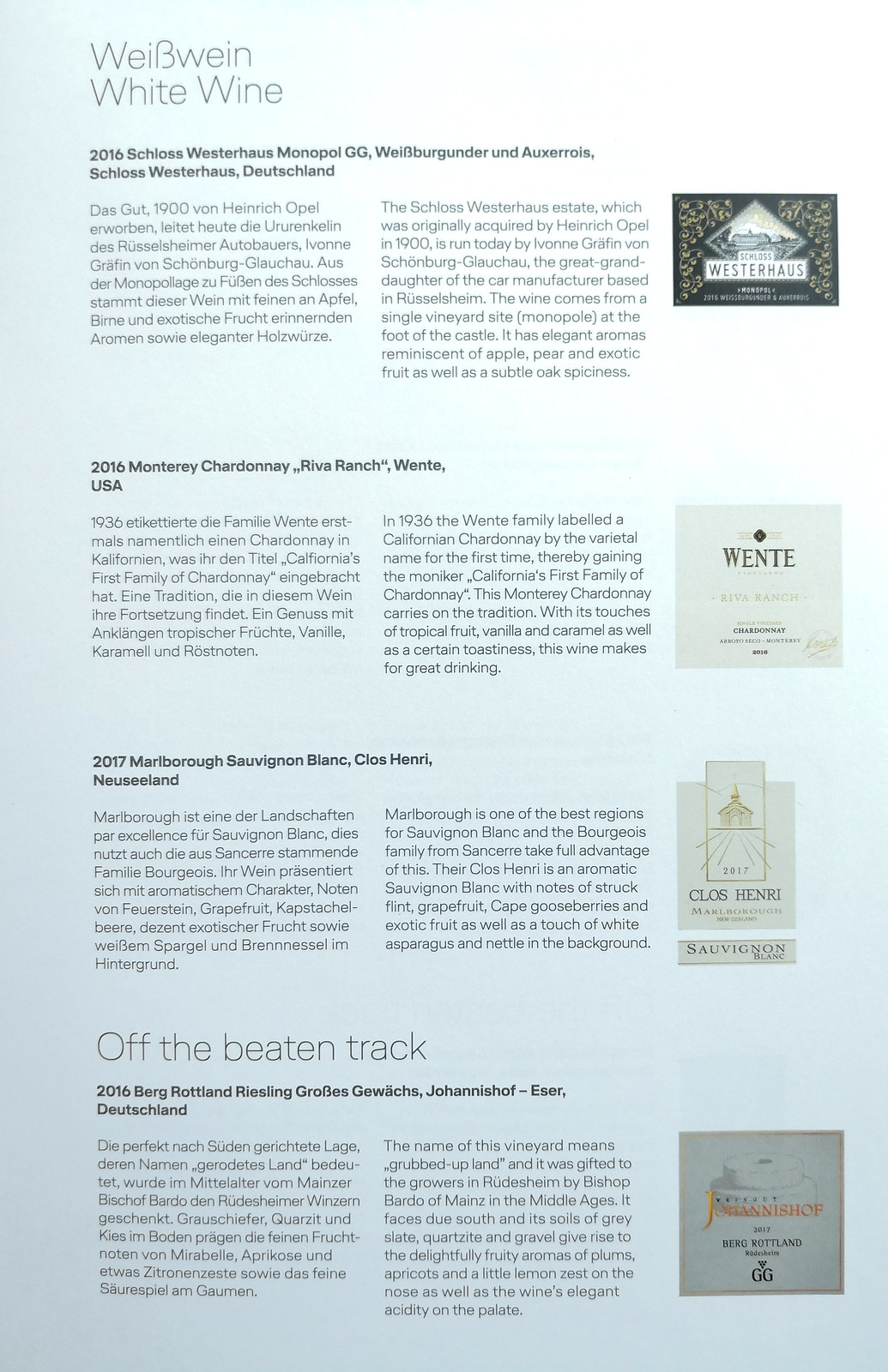 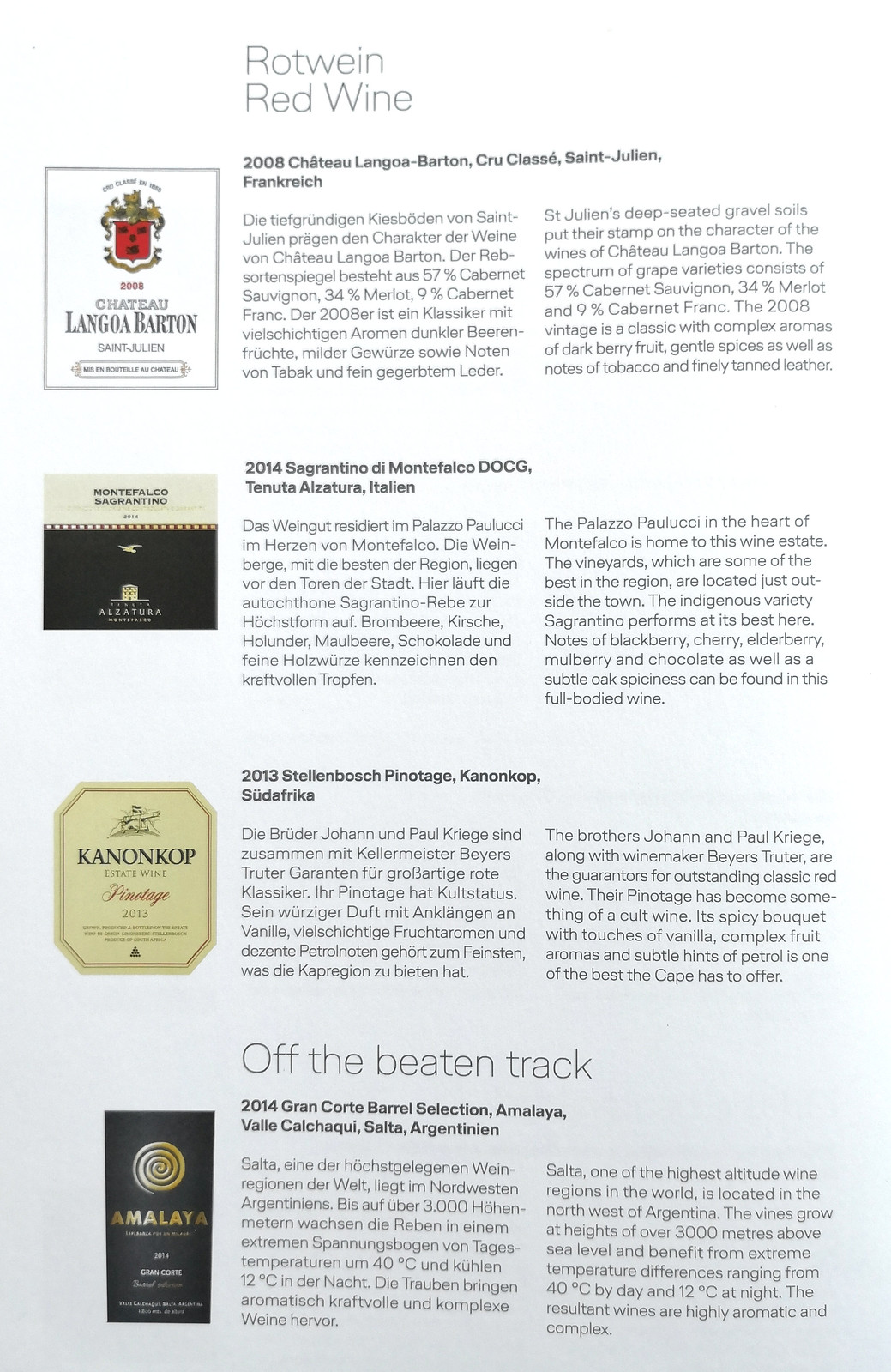 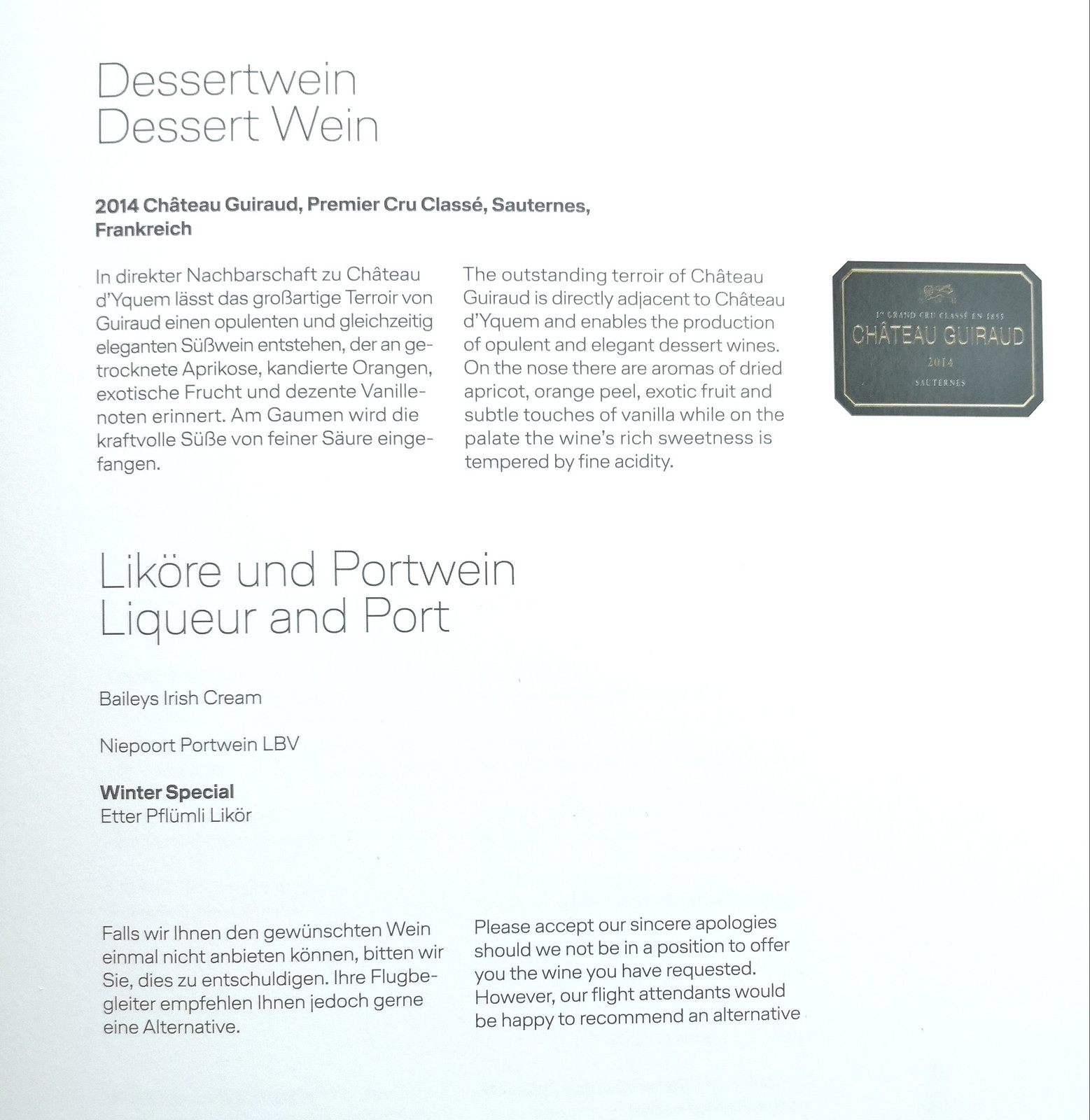 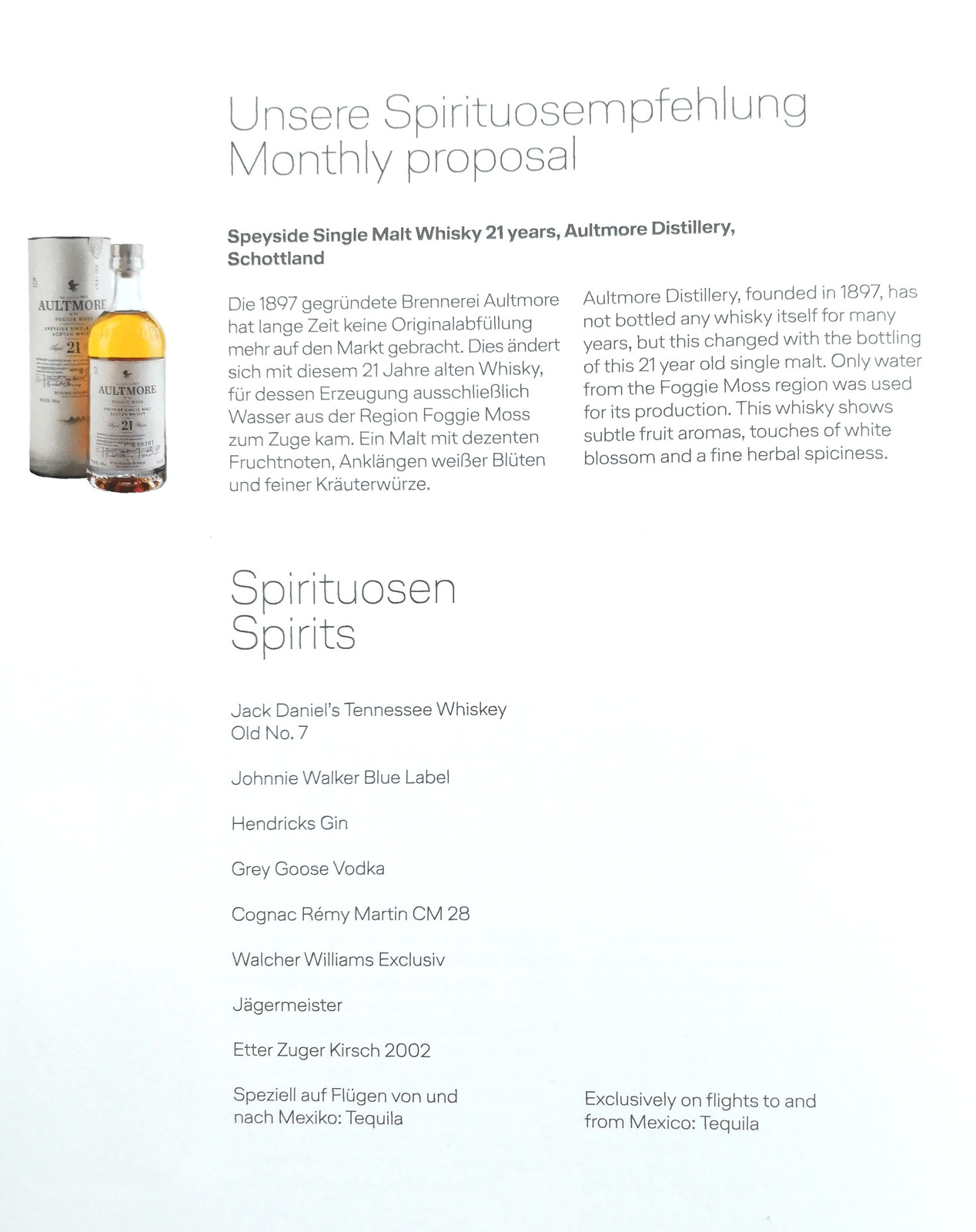 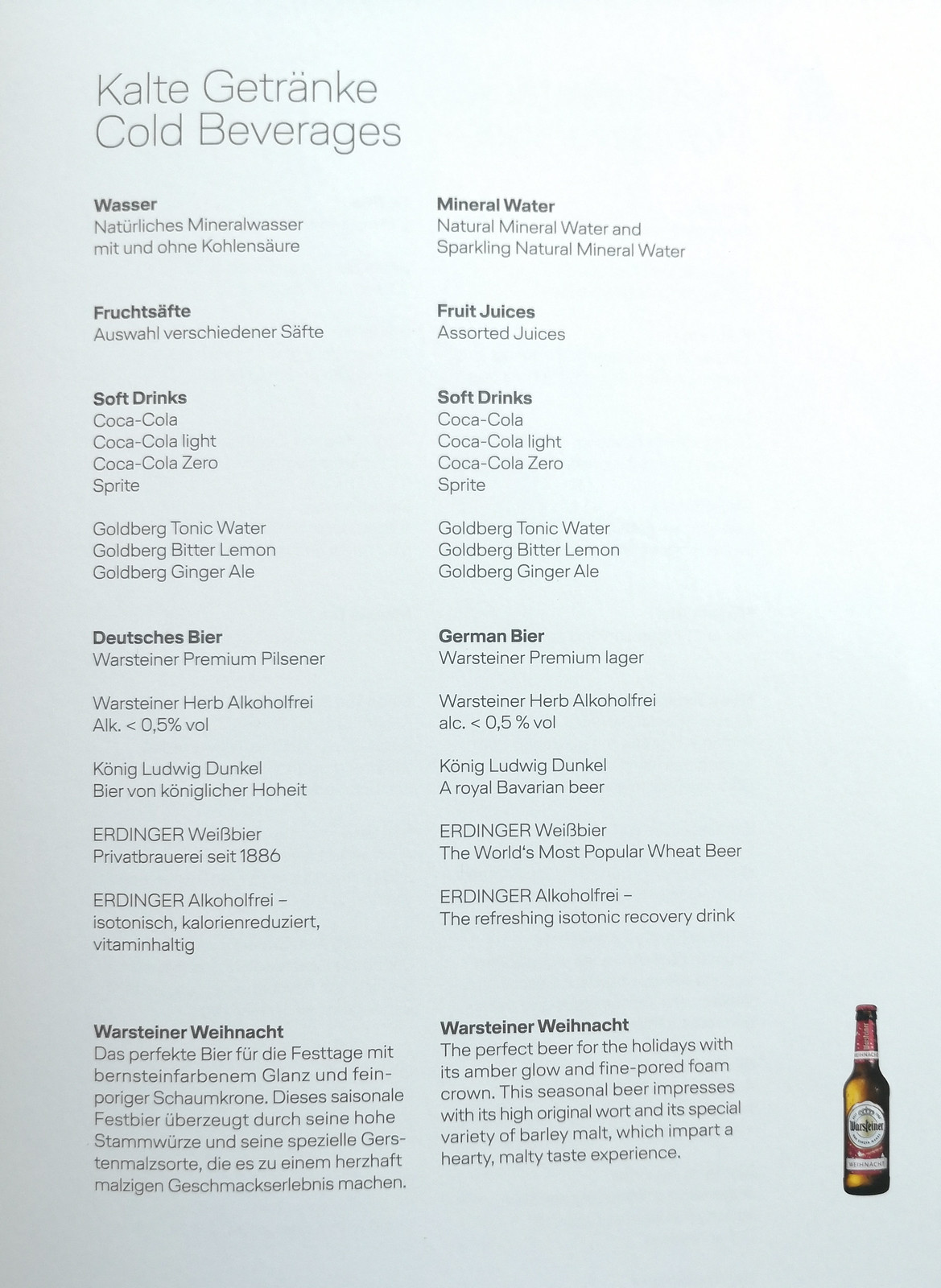 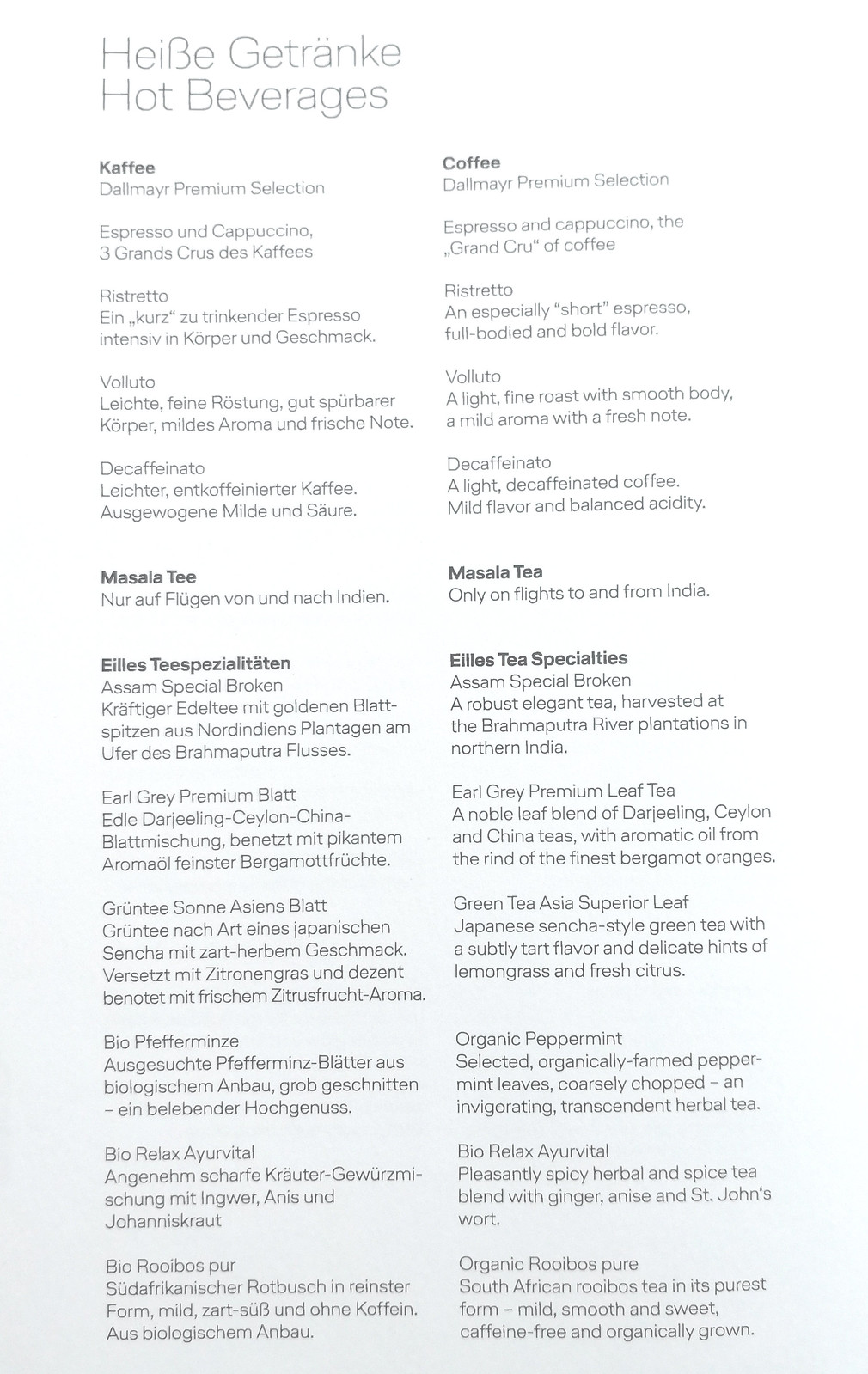 Not long afterwards, the tray was laid out with the table cloth and bread was offered by the crew. I had some of the garlic bread to go with my meal.

The caviar course came with toast which I actually prefer to blinis. There was a generous portion of caviar which came with lemon and chopped onions. The chopped egg whites, yolk and sour cream was found in another bowl. At the same time I was asked if I wanted anything else besides the caviar.

Fortunately I replied affirmatively since the appetizers were good and probably the highlight of the meal here. I had an appetizer of scallops and a garden salad which came with a small canister of Italian dressing. Both appetizer was light and suitable for the late night departure though more importantly the vegetables were fresh and crunchy while the scallops were well cooked.

Main course was out once the appetizer plates were cleared. But the presentation of the duck confit was lacking and it was a bit tough and dry. I asked for a glass of red wine to go with my meal. Since I was not that hungry, I just nibbled at the nice parts of the duck and proceeded to dessert.

There was a dessert tray with the cheese plate and the crew asked me what I wanted. I asked for both the cake with sorbet and the fruit plate.

After dessert I was offered coffee and I got a cup of Nespresso. Hot towels were presented again after the meal service, while bottled waters were given out to passengers or left by the holder if they were asleep.

Freshened up after the meal with a change into my pyjamas as the crew offered to make my bed. A great feature on the Lufthansa A380 First Class cabin are the forward lavatories on both sides for First Class passengers. Fitted with a long bench and plenty of space, it made it comfortable to change and brush your teeth before bedtime.

Both lavatories had a La Prairie hand lotion though it seems to be reduced to one type of lotion as I remembered they had a face and neck lotion as well previously.

In the drawers, there was also Evian facial mist, moist towelettes, shaving kit and comb. Since there was already a comb in the amenity kit, I always wondered why they have more in the lavatories.

Mouthwash was available on the compartment beside the sink, and the extra amenities did make the lavatories complete for refreshing yourself during a long flight. I was also glad that the space remained clean and well maintained.

The lavatories onboard has an interesting feature since it has both a urinal and a toilet so it was unique in a sense. Perhaps they just had too much space to do with it since I doubt any other commercial airplane has a lavatory as large as this.

Back at my seat, the duvet and blanket has been made for me with the privacy screen set to rise up. In addition, there was a box of chocolates placed by the seat as a turndown amenity.

In First Class, the soft bedding made the seat more comfortable for sleeping and I had a nice nap before waking up about 4 hours later though I did manage to sleep again for another 2 more hours.

Woke up somewhere around Russia and seems like many passengers did the same. As I head to the lavatory to freshen up before breakfast service, I noticed the stairs in front was barricaded to prevent passenger from accidentally falling over.

As I changed back to my clothes, I folded the pyjamas and head to the storage locker to pack it in my backpack.

For passengers who cannot sleep, there are packets of snacks that they could request from the staff. I had a couple of them when I woke up to enjoy with the movie I watched from my personal monitor.

Hot towels were passed around before breakfast service commenced with the smoothies and freshly squeezed orange juice being served. They started the breakfast on a nice note!

It was then followed with a plate of granola and warm croissant. The crew asked as well if I wanted anything else and I asked for some yogurt along with fruits. Honey was already provided in a small container.

After finishing the granola and yogurt, scrambled eggs with a crispy bacon was served. The eggs was very nice and unlike those served in other airlines. They were topped with chopped chives along with a fresh cherry tomato, giving the plate a nice presentation.

With the breakfast, I asked for a cup of cappuccino to perk me up since we would arrive in Frankfurt in the morning. Breakfast service onboard seems a bit rushed as they did serve it quite late into the flight to allow more time for sleep.

Purser came by to all of the First Class passengers before final descent. For this flight during the winter time, passengers practically never get to see the sunlight since it arrives Frankfurt with the sky still dark so that negates the view out of the window seat.

A smooth landing and a quick taxi to the gate meant another fantastic First Class flight with Lufthansa is concluded. First Class passengers gets priority for disembarkation and the crew does make sure they are the first to disembark from the plane allowing me to clear immigration quickly as well. With a long layover, I head out of the terminal for a quick walk to the First Class Terminal to wait for my next flight.

Since it was not my first flight on Lufthansa First, there was no ‘wow’ factor here. The crew onboard was fantastic and the service was flawlessly executed, while the cabin remains as comfortable as before. Perhaps there might be a slight drop in the premium amenities in the lavatory and the absence of a Rimowa kit but these are small matters in the overall passenger comfort and the First Class cabin truly shows Lufthansa at its best as a premium airline.