Boarding was stated to start at 14:50, but as I reached the gate somewhat later by the time of final call around 15:00, there was no more Star Alliance Gold or priority line.

On the bridge there was a long queue of people due to a relatively full flight. Some passengers did not manage to have overhead baggage space and had to have their hand-carried luggage checked by the gate. Inside the A320, there was the usual black leather seats which is standard on Swiss’ narrow-body single aisle fleet.

Good legroom space on the front section meant I had room to stretch out but I remain not a big fan of these new slimback seats.

Whilst boarding was ongoing, the cabin crew has prepared a bottle of water and a refreshing towel on the middle seat. These standard procedures in Swiss makes it a joy flying with them on short haul routes.

After boarding, the captain came online to indicate an expected longer flight time due to strong headwinds. Once boarding was completed, the safety video was screened on the pop out monitors.

From pullback it was quite a while to the runway where we waited in line. From my window seat in 3F, I was able to spot the old Jumbo 747 that was converted into a hostel. From there, it was not long before we took off for the skies though the cloudy weather meant there was not much to see after take-off.
But our flight quickly rose up above the clouds to catch the afternoon sun.

After taking off there was a bit of a commotion between guests on seat 1A and 2A due to some items falling out. Apparently the passenger in the bulkhead seats did not store their shopping bag up on the overhead bins leading to berries rolling out and it riled up some passengers. The crew got around to settling this dispute quickly before conducting the meal service.

Meal service conducted early in the flight. Coinciding with the World Cup season, Swiss was offering a selection based on Yann Sommer’s favourite cuisine. The dish was slices of chicken breast on strawberry and mango salad, and I did have to say the dish was enjoyable since the chicken slices were tender and there was plenty of flavour from the fruits and dressing.

Bread in the form of a soccer ball was offered from the basket, while there was a chocolate pudding served as dessert along with a cheese plate. At the end of the meal more beverages were offered and I asked for water and coffee. The coffee came with a pack of sugar and small creamer, so this meant the crew did not need to ask passengers on how they like their coffee.

Chocolates in the form of a ball was distributed after the meal. What I noticed in this flight was there was no pro active sales of duty free even though the flight time was still some time to go. I actually liked it since it kept the cabin quiet for resting and I am of the view that passengers who would like to purchase something would contact the crew anyway.

Arrival gates shown on the pop-out screen for passengers but I was a bit too far to see if clearly. This is certainly the drawback of old style pop out monitors. 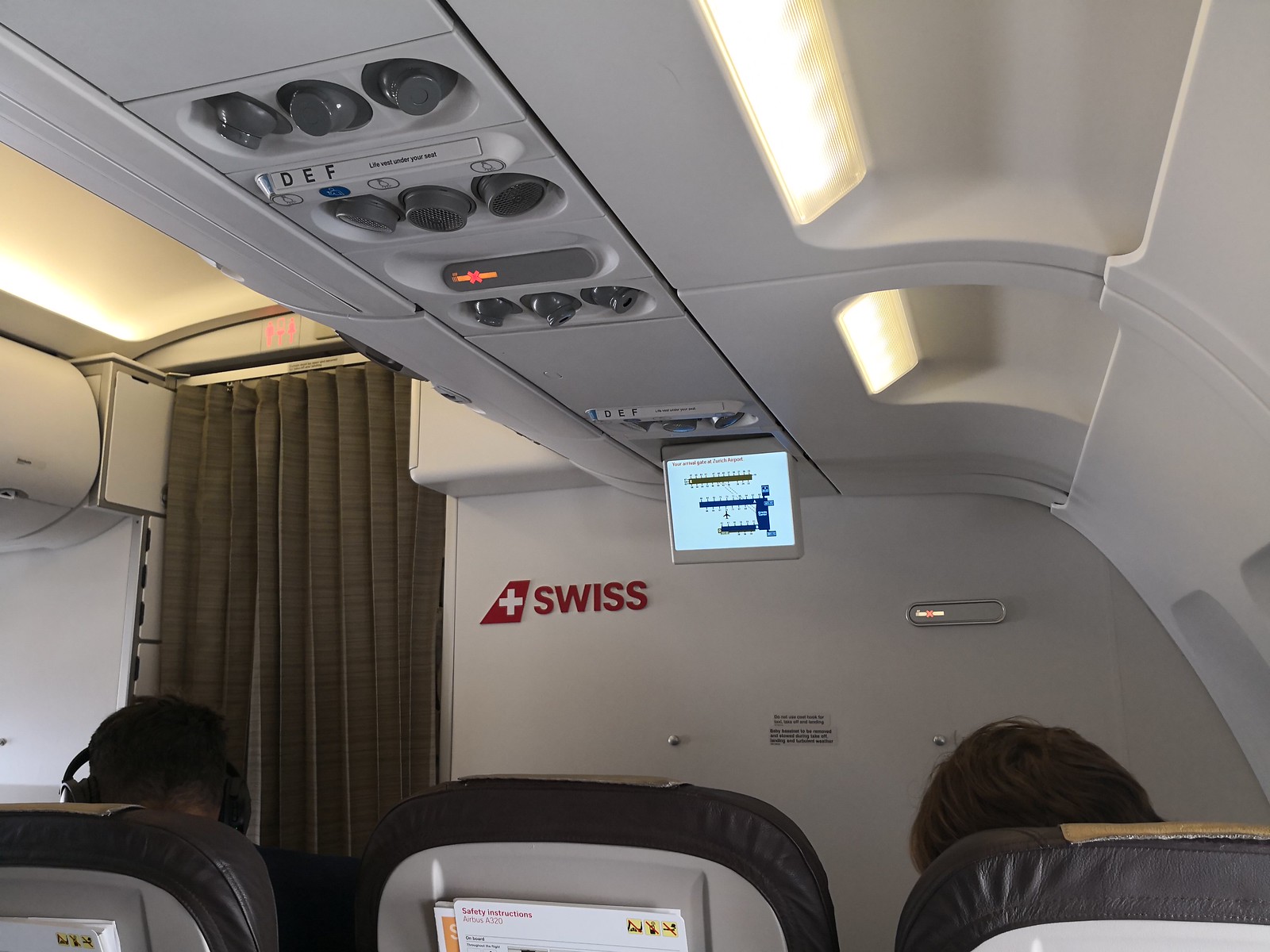 Descent started at around 17:25. We flew past the Black Forest on our descent and there was information displayed from the pop out screen on significant places of interest when we flew past by.

Eventually we landed in Zurich and parked next to another of Swiss’ Airbus A320 at concourse A. With a long layover scheduled, I was set to enjoy Swiss First Class lounge and looking forward to my flight onboard Swiss’ flagship cabin. Overall, I always seem to enjoy short-haul flights on Swiss as they are fairly consistent with their product even if the passenger and crew interaction is at a minimum. One thing for sure is that they are worthy of a premium airline!