Getting to Stockholm Arlanda Airport via the Arlanda Express train took just 20 minutes from the station and it was a comfortable ride similar to my experience getting to Oslo city centre from the airport. Gotta love these Scandinavian public transport systems!

I had some tax refunds to settle first before leaving Sweden and I have to say the tax refunds process in EU is very inconvenient for a developed country. Sometimes I wonder why can’t they make it more straight-forward like in Singapore? The terminal was not huge so getting to and from the customs clearance and tax refund offices was not a big hassle but getting through the crowds of travellers in the summer time takes a bit of work. Eventually I managed to check my luggage all the way so I do not need to retrieve it in Zurich.

With my boarding pass on hand, I passed through security check to find a vast duty free shop as it attracts travellers on their way to the gates. I find airports just seems to use this to make people walk a longer way to get to the gates.

Past the duty-free counters, there was some currency exchange kiosks before turn left once more to walk through a walkway to the elevators with signs to the lounges located on the second floor. Alighting from the elevators, an LCD screen with the SAS blue greeted me showing the facilities in the lounge with the Star Alliance Gold logo set below. The lounge entrance further splits up into 2 sections with the Star Alliance Gold lounge located to the left while the Business Lounge was located to the right. Self-scanning automated gates were set as barriers like the SAS lounges in Oslo, and I managed to get through to the Business lounge with no issue.

Greeting guests past the barriers was a magazine shelf while newspapers were available for digital downloads. However when I visited most of the magazines were in Swedish or other Scandinavian languages. I suspect English language magazines are less common here.

The dining section is up-front in this lounge like most airport lounges as most travellers tend to grab a bite during their time waiting for the flight or in transit. Seats here are arranged by the walls with stools and circular tables. There was also larger communal round tables and bar stools that allows solo travellers to work and dine at the same time.

These larger round dining tables have a central storage area for condiments like pepper and salt along with napkins and packed wet towels.

Next to the dining tables was the buffet counters with a central island space dedicated to the main food section.

There was the ubiquitous salad bar with fresh tomatoes and carrots as well as a mix salad or two. Several types of dressings can be found at the end of the salad bar.

These breads are great to go along with the pot of soup in the buffet. Selection on the day I visited was Indian curry soup. Green onions and croutons was provided as toppings on the side of the soup pot.

Other selections of snacks around the buffet counters includes a cheese board with a built-in slicer along with potato chips and pretzel sticks available from large bowls.

Healthier options like fresh apples are another common sight in airport lounges and they are convenient to grab on the go as well. 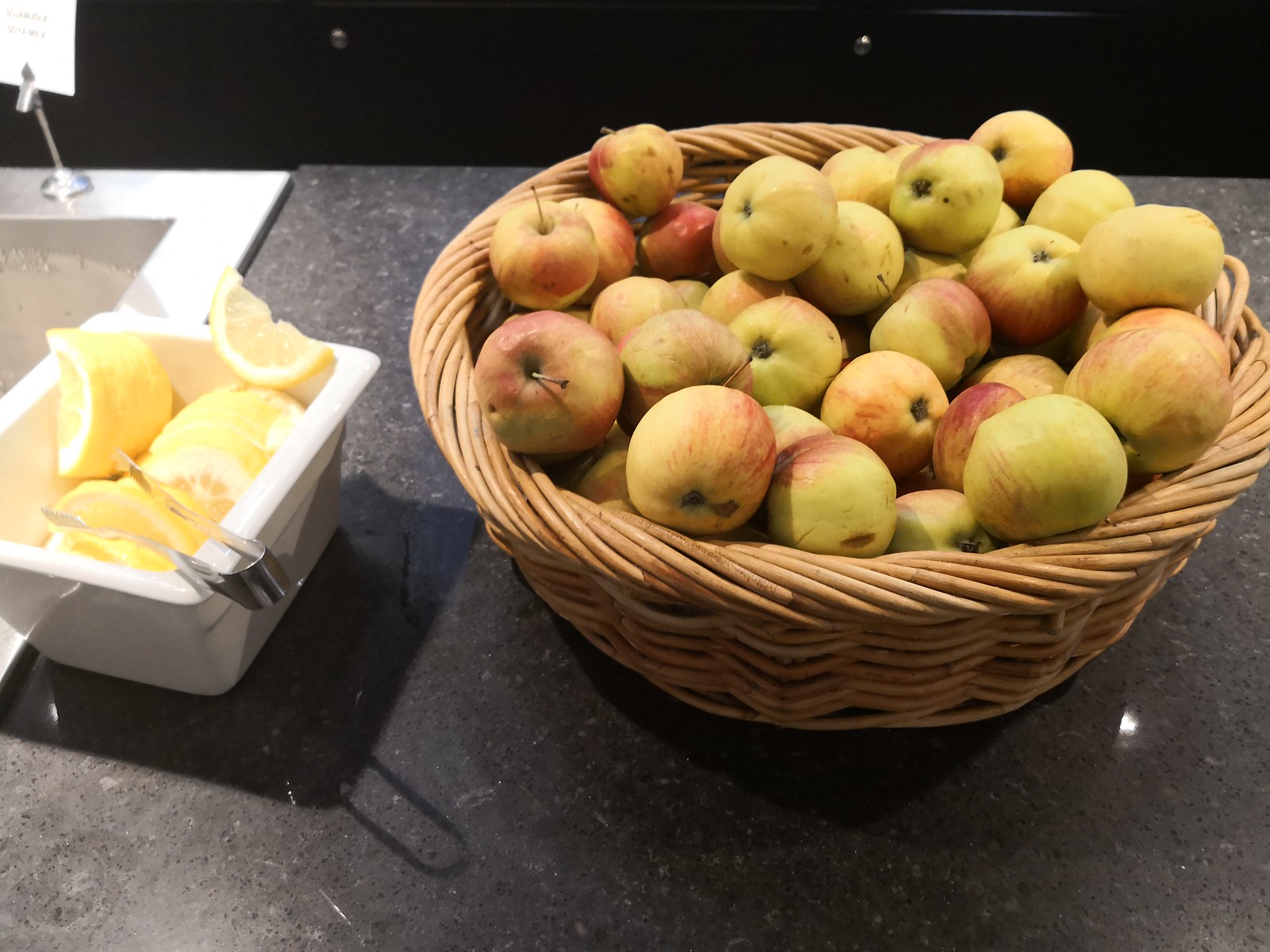 For beverages there was the usual espresso machine and a variety of tea bags. Packets of hot chocolates was available as well and they can be enjoyed with cookies on the buffet counter.

An interesting thing I found in this lounge was the wines that was served from the carton. I found this was a very ‘cheap’ way to serve it. But since wine is so cheaply priced at times in Europe, I figured it might be acceptable.

The food selection was quite underwhelming but at least the dishes on the salad bar looked fresh and there was quick replenishments of items on the buffet counters. Since I was not expecting to have my meal here, I just had a bit of the soup with some snacks.

Next to the dining area, there was a corner setup with workstations and bar stools so guests requiring computers to print and check their itinerary could do so here. The bar tables here are also conducive for working on laptops as there was power outlets conveniently placed at certain sections. 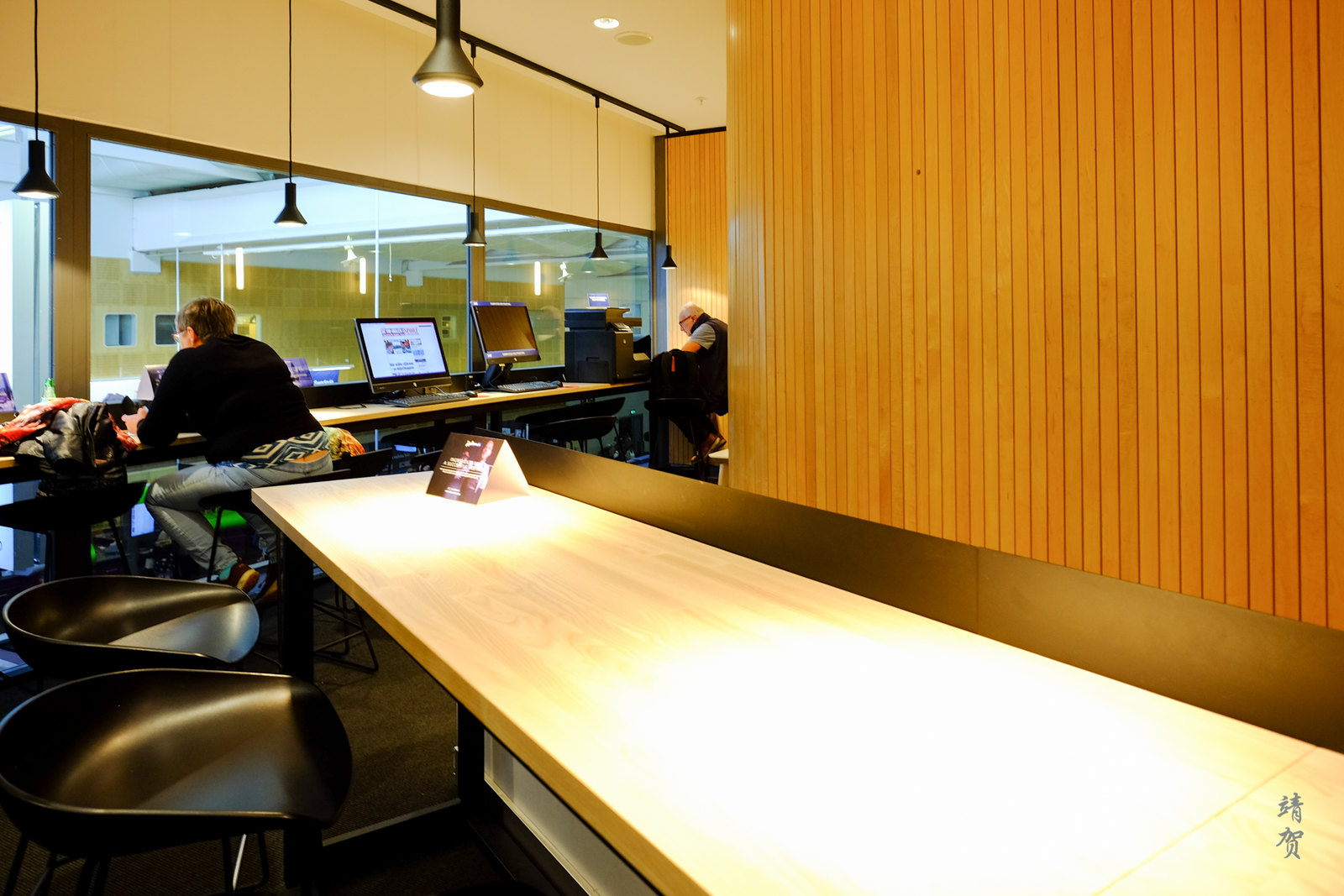 After that it was the main seating space but the crowded lounge meant this area was more or less filled up. With not much segmentation and a lack of space, guests should not expect much privacy in this lounge.

A walkway next to the seating spaces leads to the restrooms which are private cubicles with a sink and a toilet. No shower rooms were available here though they might have been available in the lounge next door for Star Alliance Gold.

At the end of the walkway, there was another section of the lounge. This section contains the TV with a nicer seating arrangement. As it was showing the World Cup matches, this was a popular spot at the time of my visit. By the walls, there was private phone rooms which is a common feature in SAS lounges and they make it better for travellers requiring some privacy in conversing with families and not disturbing the other lounge users. If I had plenty of time to hang in the lounge, this section would be the prime spot, but it was not long before my flight was called for boarding which meant it was time to leave for my flight. 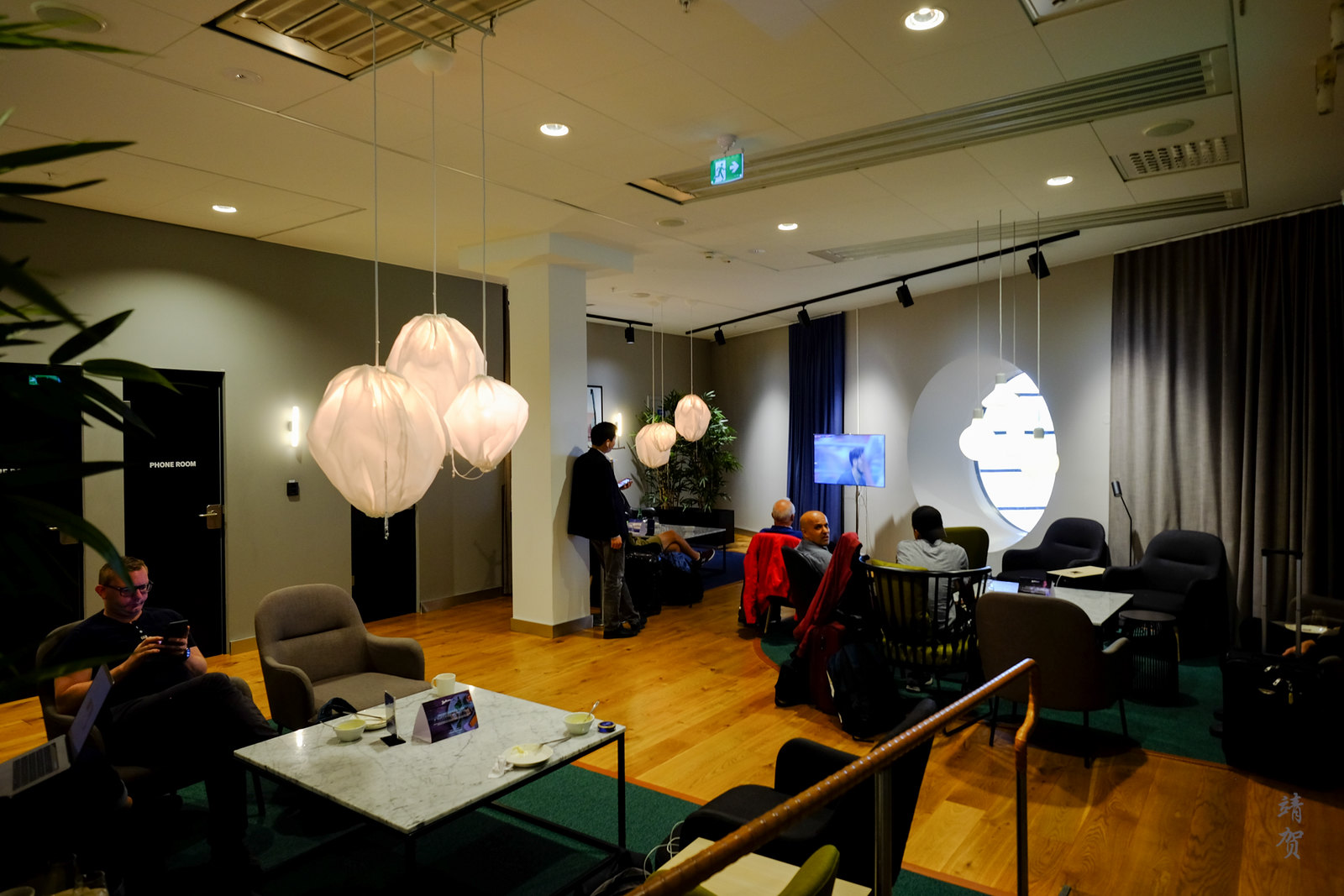 The SAS lounge in Stockholm’s Arlanda Airport Terminal 5 was adequate considering it serves mainly international and Schengen flights and has less transit passengers. However as it was busy during my visit and I had some difficulty getting a seat to just rest, they are not optimal by any means, so travellers should not really expect too much here.

One thought on “SAS Lounge at Stockholm Arlanda Terminal 5”