For the remainder of my stay in Stockholm, I chose to stay at Hotel Skeppsholmen, which is another Design Hotel located in one of the numerous islands that makes up the city of Stockholm. The unique part was that this island is of walking distance to the city and is a tourist attraction in its own right.

Originally an army barrack, the hotel comprises of 2 long 2-storey buildings. The lobby and reception is located in the further end when arriving from the city with a garden and patio seating outside. A plain lobby with a reception desk receives guests and a staff member assisted me with the luggage as there was some stairs on the way to the reception desk.

As I checked in around noon, I was told that my room was not ready and I could wait in the restaurant. Since my intention was to head to the city for lunch, I left my luggage with them and head out to the city, returning in the afternoon to collect my key.

Upon my return to the hotel in the evening, I was assigned a room on the 2nd floor and fortunately there was elevators that brought me to my room facing the garden. Room is relatively spartan and small in size, with the bed visible on entry.

On the right side of the room there is a closet by the wall, and across the bed was a TV hanging from the wall.

Beside the closet there was some hangers and a sign with the room numbers. As a heritage building, the exact room that I was assigned actually used to be the room of the Head of Stockholm’s Navy Station. The individuality of the room certainly made it the more memorable of an experience.

Inside the closet, guests could find a shoe horn and laundry bags. Beside it there was a basket with things that travellers might have forgotten to bring such as boxers and socks. And beneath that was the in-room minibar and safe.

Across from the bed lies a small alcove which leads into the bathroom. The alcove also holds a desk by the wall where the telephone, stationery and a welcome gift was placed at. There was also a bottle of water on the desk. With a window on the side, there was enough light to use the desk in the day comfortably.

Next to the desk is the bathroom which has been decorated with dark tiles to give it a modern look. At the end of the bathroom was a walk-in shower cubicle with a glass partition. However the partition was not wide enough to prevent water from splashing onto the floor during showering since they did have a rain shower head in addition to the hand-held shower head.

What makes the bathroom special was the special sink that has a large pebble shaped object in the middle while water flows around it. While unique, it did not really functioned optimally as a sink.

Otherwise the bathroom was kind of small similar to the bedroom. There is a ledge that provides space to hold toiletries and cups with covers indicating Stockholm’s tap water is clean and perfectly fine for drinking. Amenities in the bathroom was supplied by Byredo which is a premium fragrance brand out of Sweden.

From the second storey room, I had a view of the garden and the front entrance to the hotel so this can be a bit noisy in the day especially when the hotel is busy. Otherwise, the view is beautiful for a city hotel.

Breakfast in the Hotel

Breakfast was included in every stay here and it is served in the restaurant beside the lobby which is the only dining venue in the hotel. It is served from 7am to 10am every Monday to Friday, and from 7:30am to 11:00am on Saturday and Sunday.

Usual continental options like croissants, pastries and breads are found freshly prepared on the buffet table.

Cold dishes like cheese, ham and smoked salmon are available as well and there was sides of sliced cucumber and tomatoes to go along with the dish. There was mustard sauce as the condiment for the salmon. Local sausages and pates make up some of the local Swedish specialties

Aside from mustard, there was pickles and various spreads that guests could use on their bread.

Boiled eggs (half or full) were available from the basket with smoked haddock roe as a topping. There was a corner of gluten-free options and guests could also order raw porridge with apples, pear, celery, linseed (flax) and cinnamon. 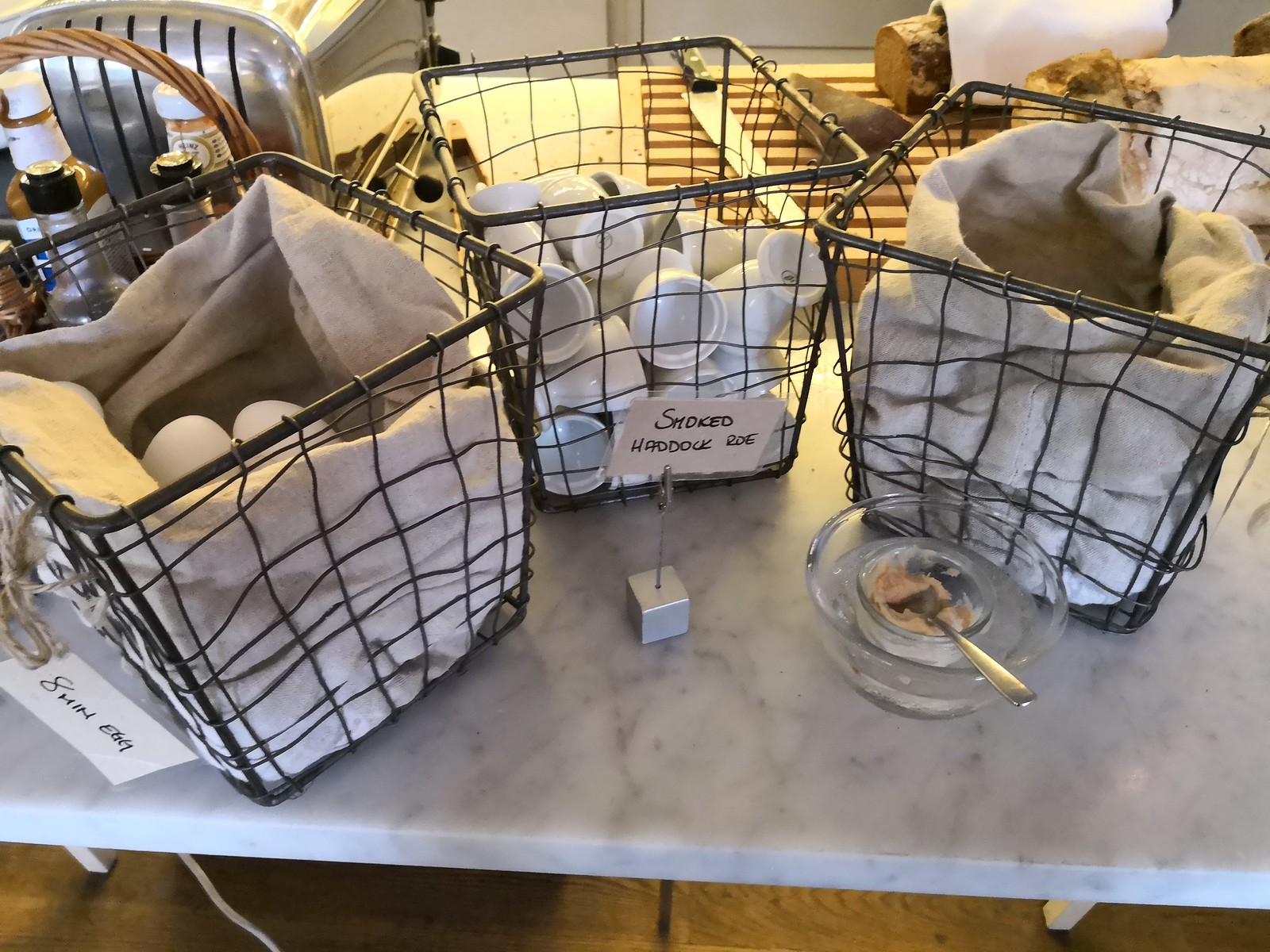 Sweet stuff in the buffet includes plain and flavoured yogurts served from the jugs while the granola and muesli along with dried fruits were served from the glass canisters beside it.

Choices of fruits here was between fruit cocktail prepared in a large bowl or fresh grapefruits in the summer.

For drinks, there was grapefruit and apple juice, milk and still water from the jugs. Standard brewed coffee and tea was available while diners can request for cappuccinos and lattes from the server.

All in all, the breakfast was something one might see in most Scandinavian hotels and the quality was good even though if the choices was lacking. The restaurant space was nice with comfortable seating and a relaxing yet modern atmosphere.

Besides the restaurant, the hotel has a couple of other amenities. One of them is the outdoor tennis court that guests are entitled to reserve for one hour for every stay. This is a historical tennis court that the King of Sweden used to play in, and its location across the hotel in the park was perfect for a summer day activity.

Inside the hotel on the second floor, there is a small fitness centre in a room across from the elevator. This small space holds one treadmill, one cycling machine and a bench with a rack of weights. Simple enough for a modern workout, the hotel provides towels, fresh apples and water for guests using this space. However with the hotel’s location, guests needing a workout could simply jog around the island as it is a popular place for locals to run.

Room rate here was around 2,030SKr per night inclusive of taxes (~$225), which is still one of the cheaper options in Stockholm during the summer time. While the rooms are small, I enjoyed the somewhat secluded and special location of the hotel. It was near to the city which is accessible by either taking the ferry about 5 minutes from the hotel or one could walk out of the island to the city in about 10-15 minutes walk. That feeling of staying in an island with a rural feel and yet being so near to the city makes this hotel a winner in my opinion. It was definitely a highlight of my visit to Stockholm and my guess is very few hotels in the world can match this property for its setting.