For my connecting red-eye flight to Tokyo Narita, I was assigned a departure gate nearer to Terminal 1 which meant a bit of a walk from the lounge. Thus I was one of the last few Business Class passengers to board to what seems like a packed flight. This will actually be my first time flying Singapore Airlines’ Business Class on their long-haul configuration, which means the first time testing out their all lie-flat seats in Business Class.

Champagne and orange juice was offered to passengers on boarding. Hot towels are distributed and magazines was offered. I requested for National Geographic which the stewardess found a copy for me. The 777-300ER that I boarded was configured in the older style seats which is still fine to me as it gives me the chance to compare the older seats and the newer ones that I will get to sit on the way back (look out for the review once it is out!)

On the front right side of the seat, there was a nifty little tray that can be pulled down for the placement of the welcome drink.

One drawback of being assigned these older style configuration meant the seat pillows and cushions are still in the old upholstery which is a bit outdated when I had the new pillow covers that looks a lot smarter on my last short-haul flight. I still appreciated the 2 pillows, one larger square cushion and another smaller rectangular one that can function as a lumbar support of sort. Either way, these cushions help to support your seating position since the seat is definitely the widest I had in a Business class cabin. For an old seat, the leather was still comfortable and in a decent shape even if it is a bit rough on the edges.

I had a standard window seat at first which meant the leg rest was a cut out by the window that seems little bit constricted from the photos and it does mean that taller passengers need to curl up a bit to be able to sleep in the seat. A pair of slippers, socks and eyeshades are the other 2 amenities one can find onboard Singapore Airlines’ Business Class as they do not have any amenity kit with other amenities like toothbrushes, lotions and comb available in the lavatories.

On the left side of the entertainment monitor, there was a small storage space without any cover so they are useful in placing things like your meal menu, or newspapers. Though anything bulky or important should not be placed here during take-off or landing since they can drop out.

Some issue after the door was closed meant we were waiting by the gates. During the wait, I was grabbing some stuff our of my backpack and after noticing me, the flight steward asked me if I needed any assistance. During the wait, another stewardess went around asking if passengers wanted the meal after take off or 2 hours before landing and I asked for it to be done before landing. These initial interactions with the crew certainly started the ball rolling and showed that this flight is manned by a professional crew members with attention to passengers.

The menu for this particular flight was as follow: 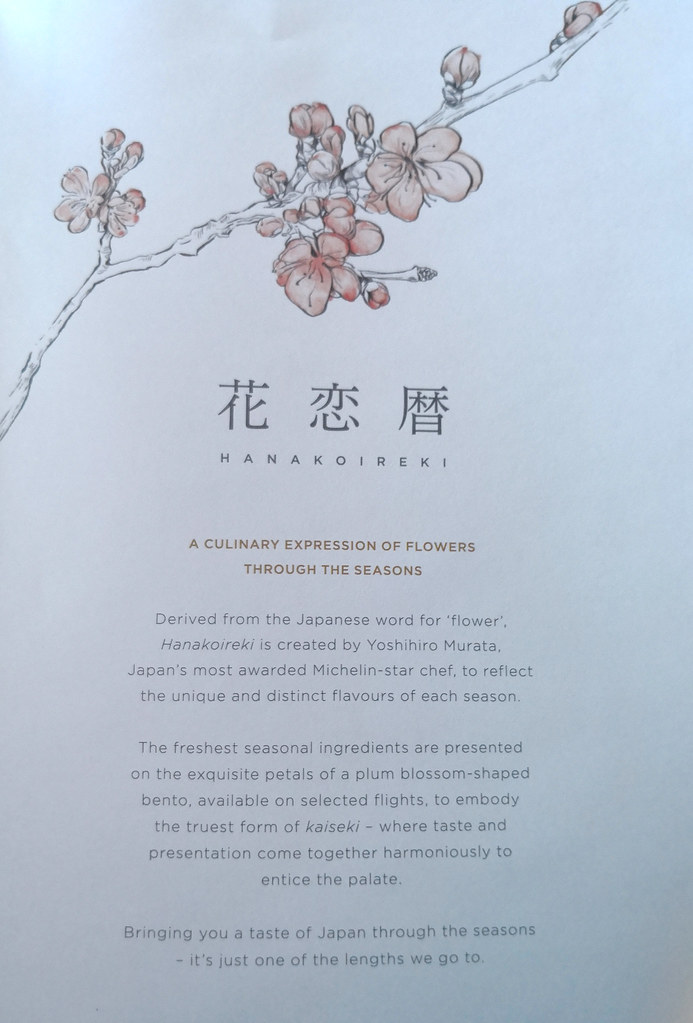 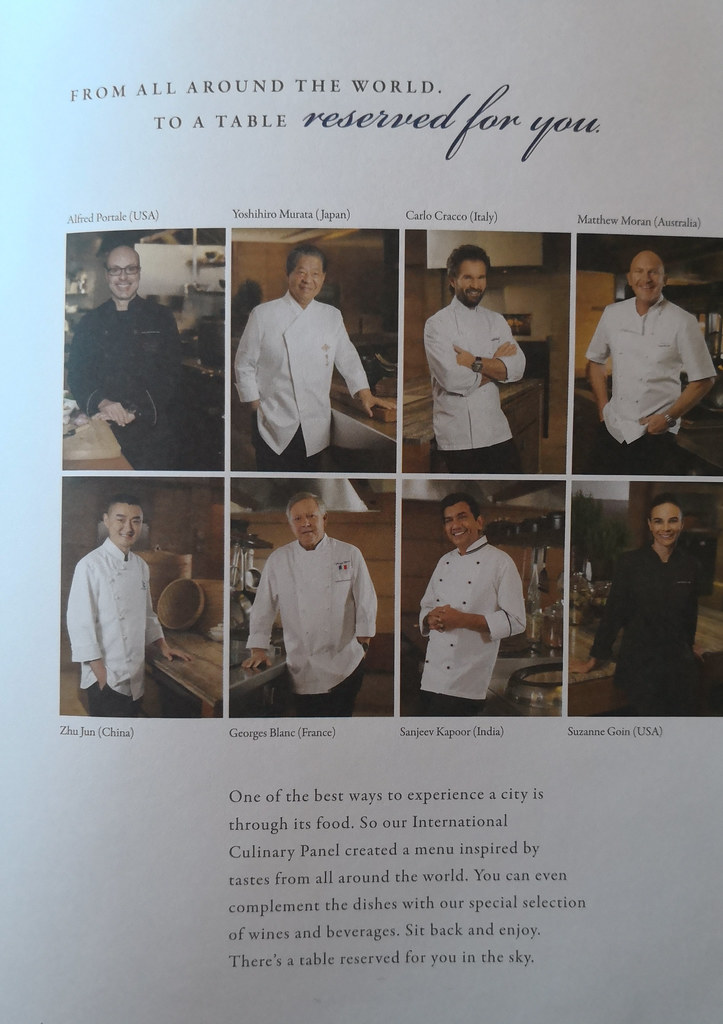 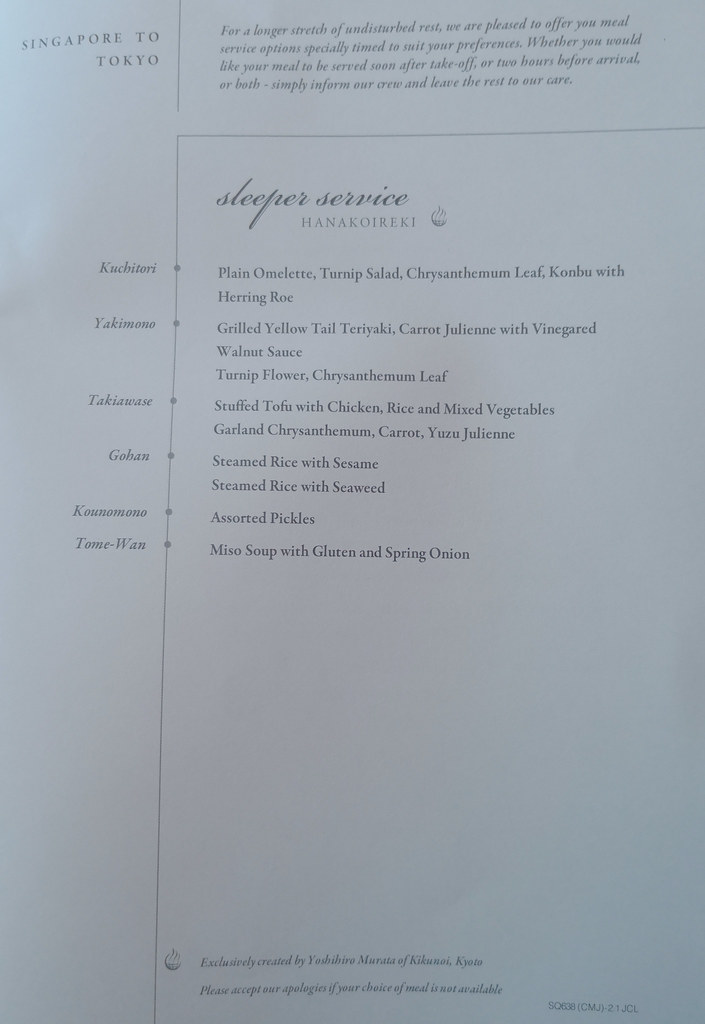 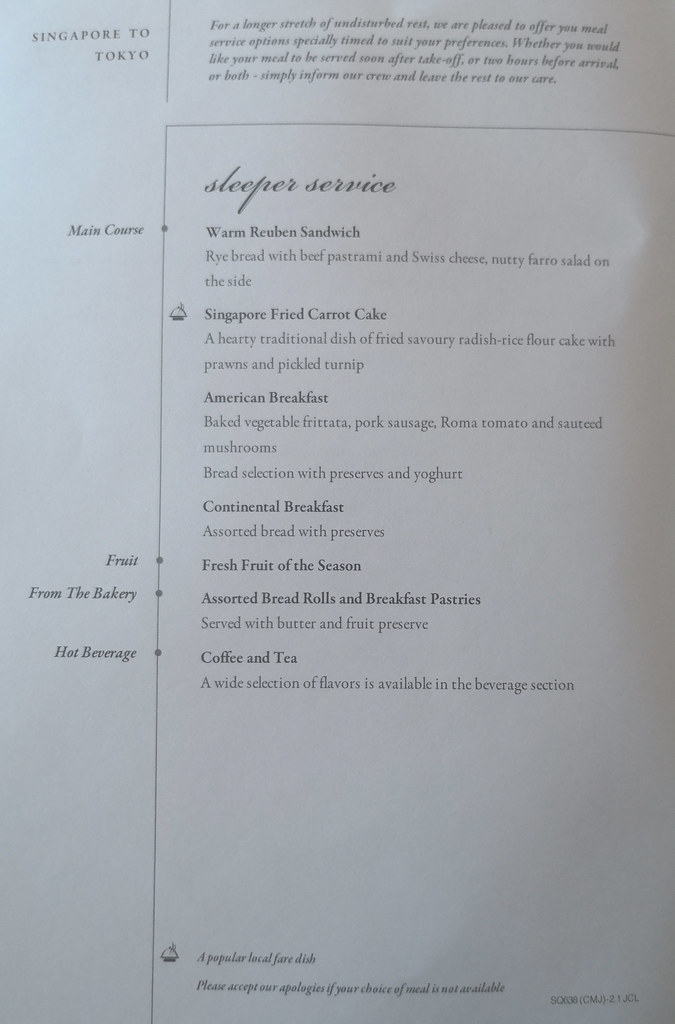 And the beverage list was as extensive as it could be for a Business class flight. There are definitely enough alcoholic and soft drinks to satisfy the demanding passenger. 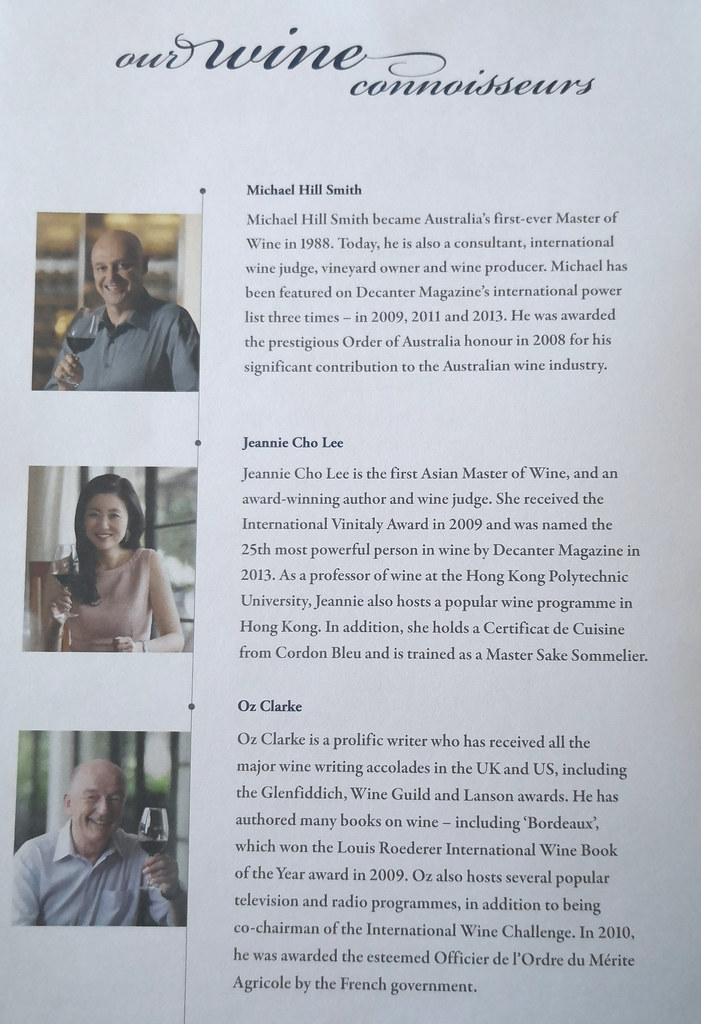 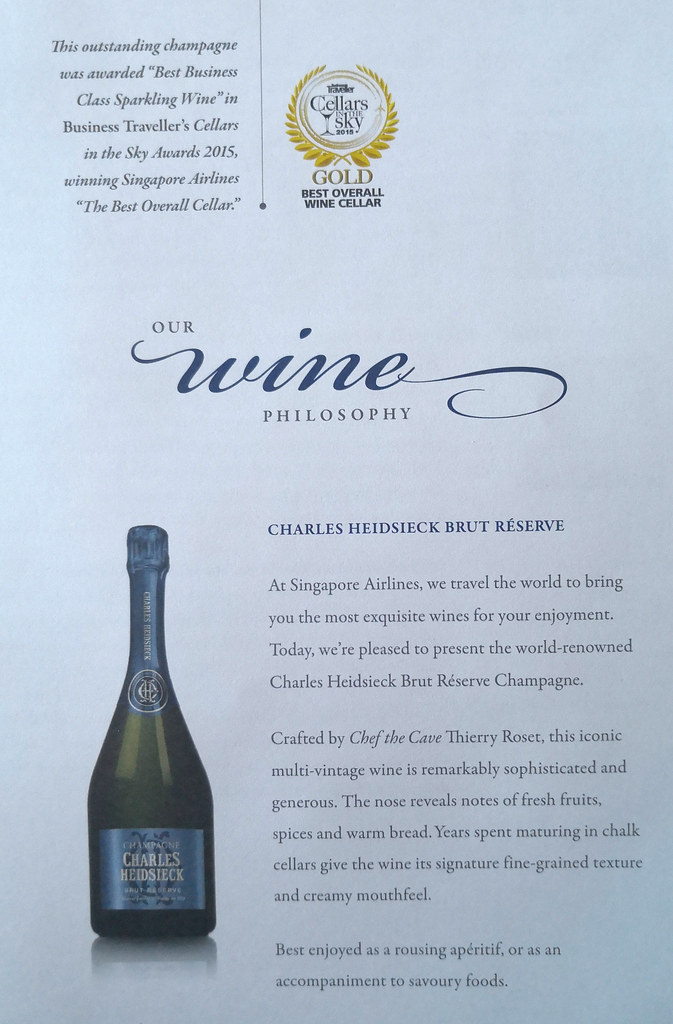 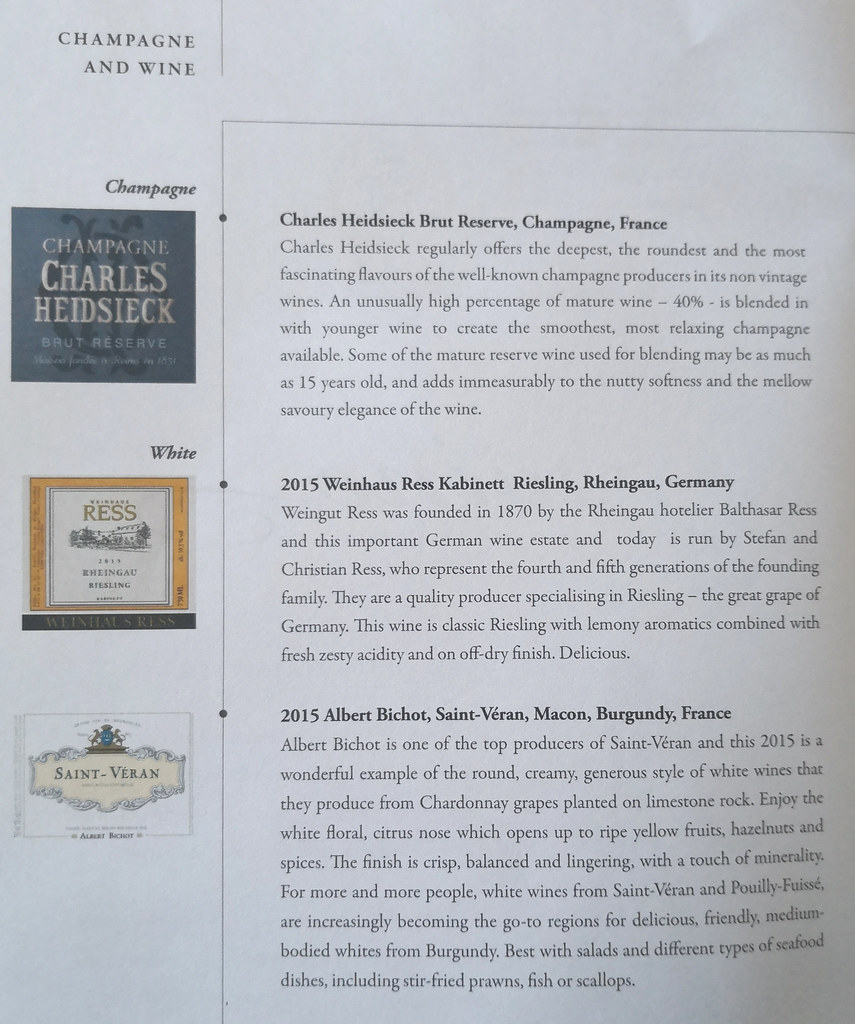 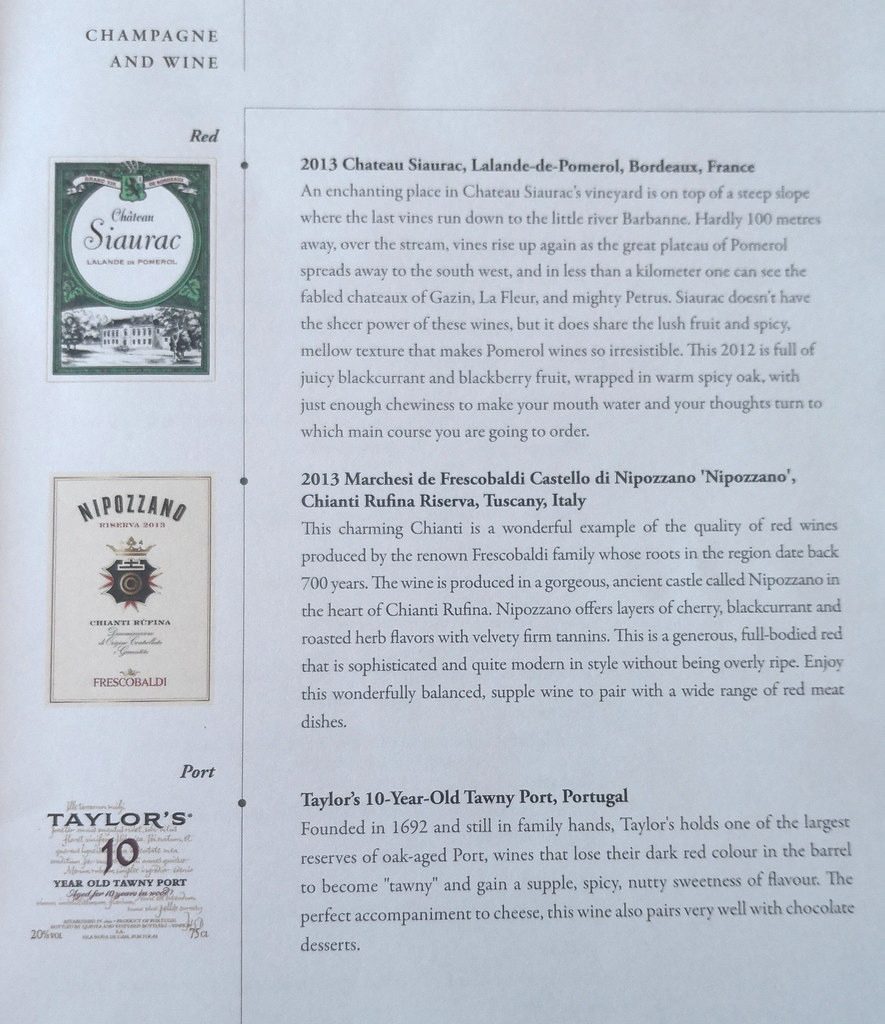 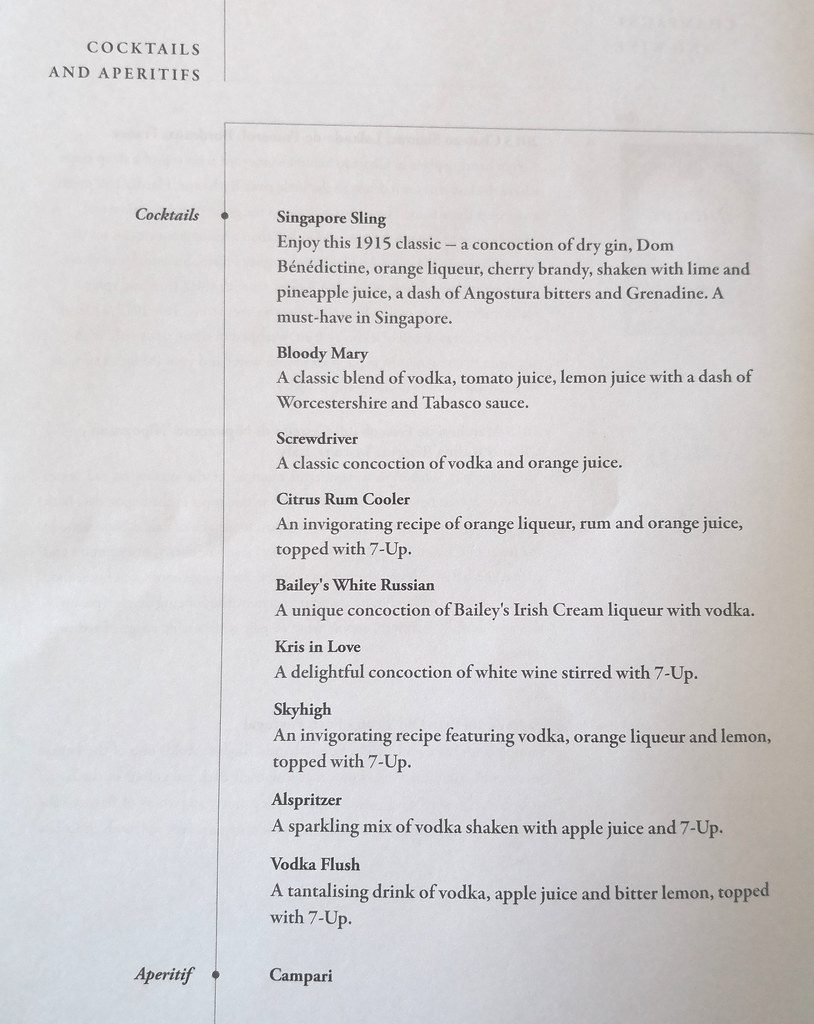 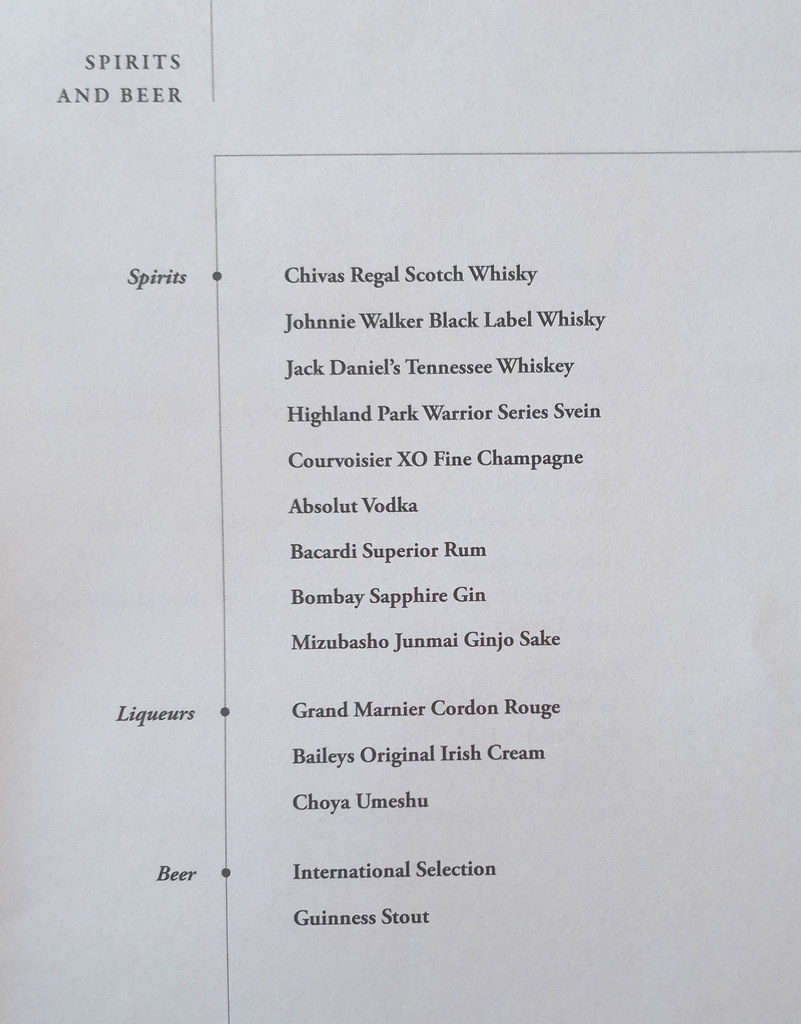 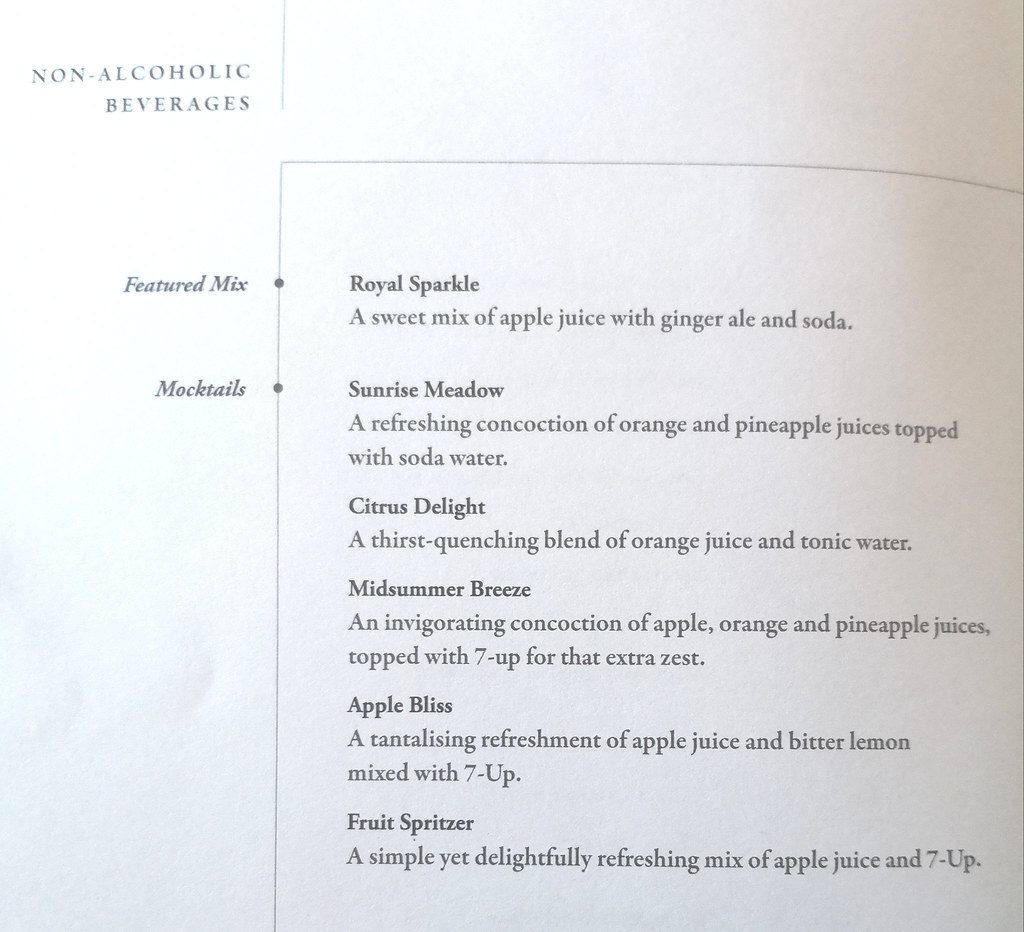 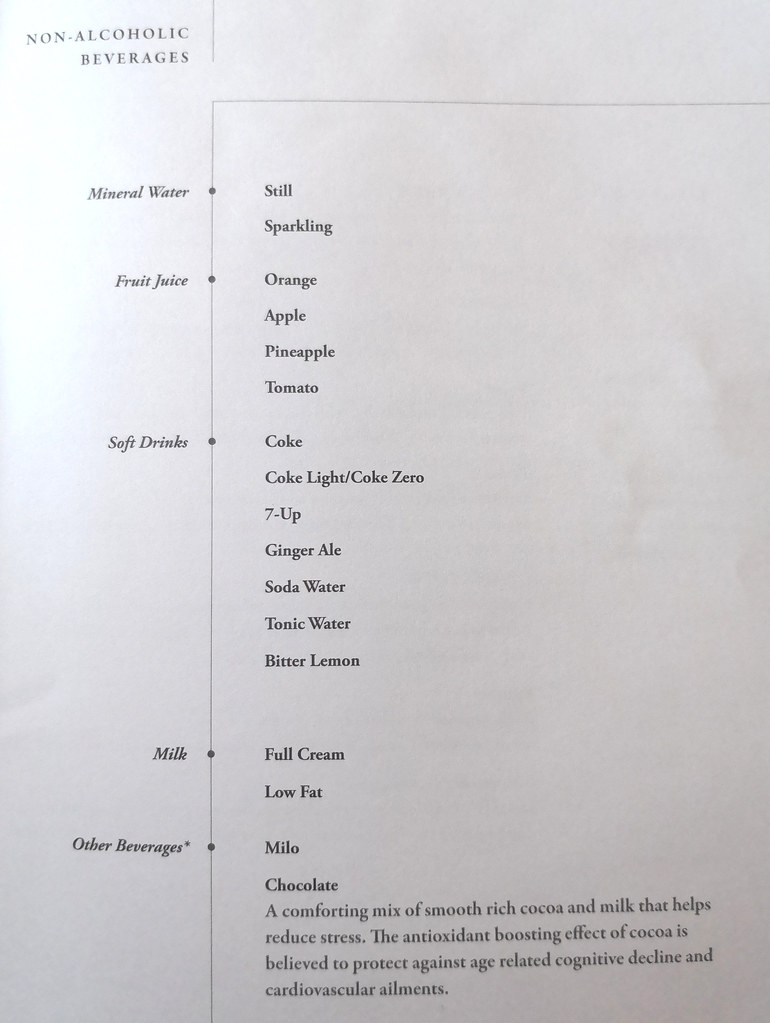 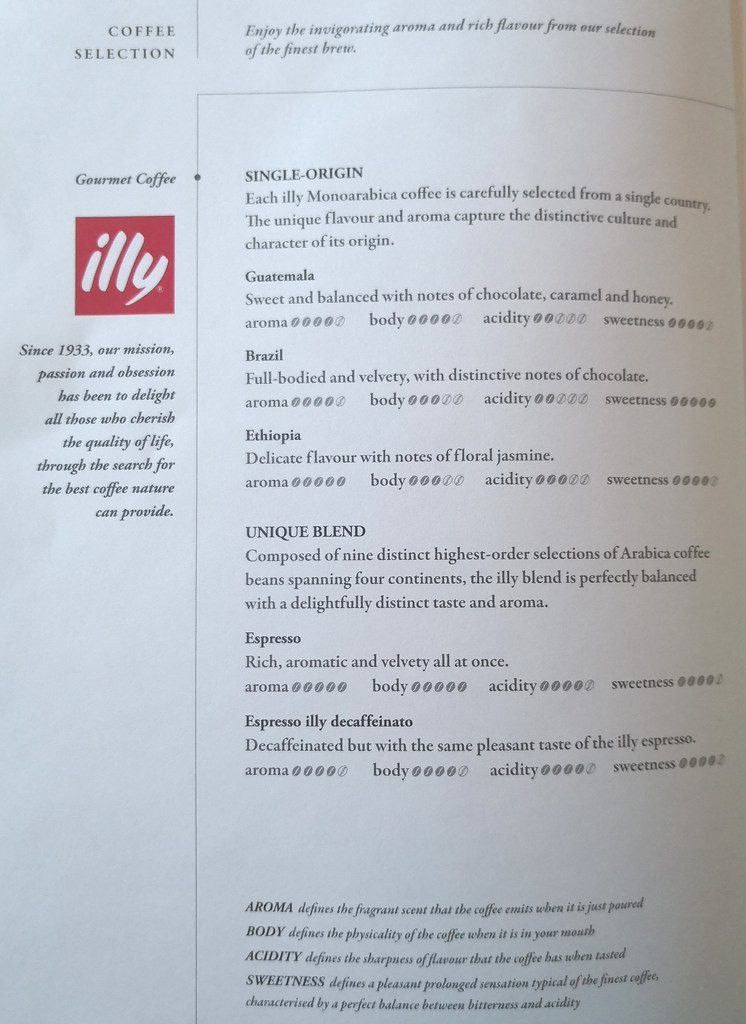 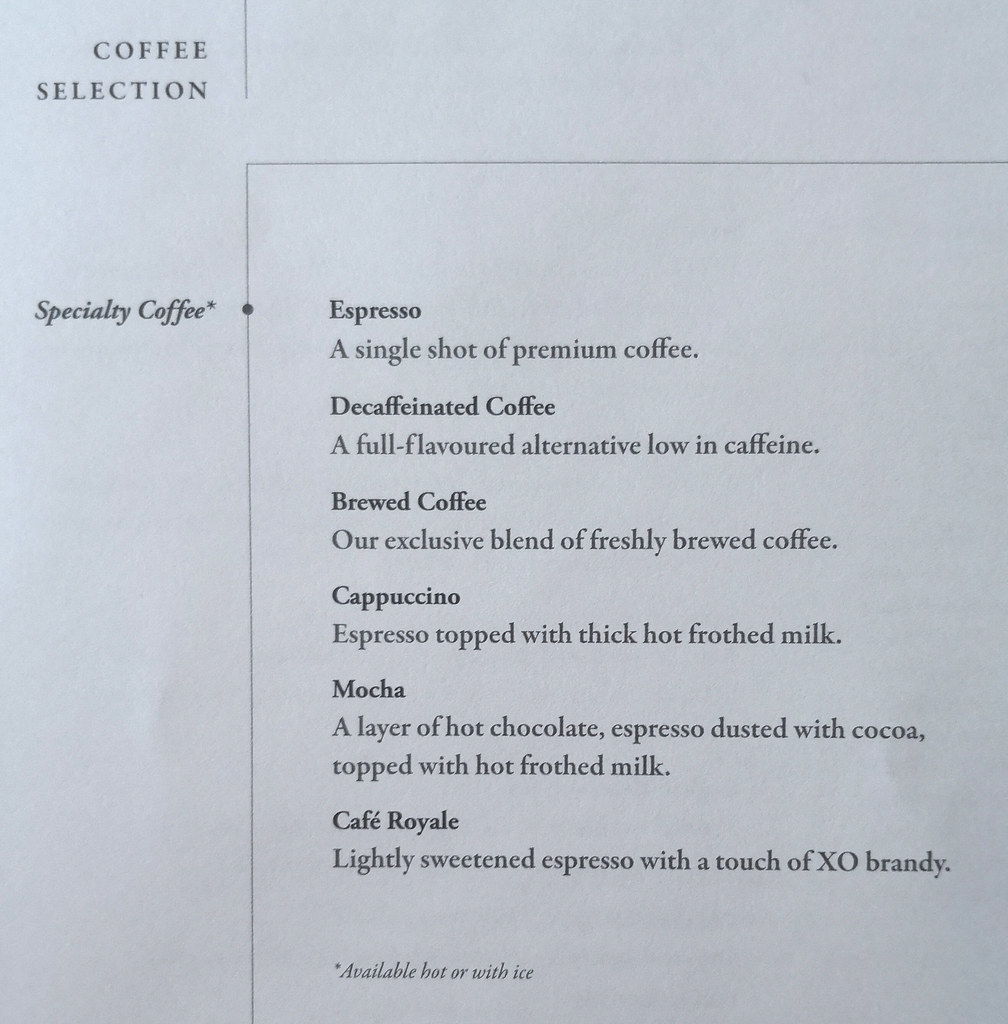 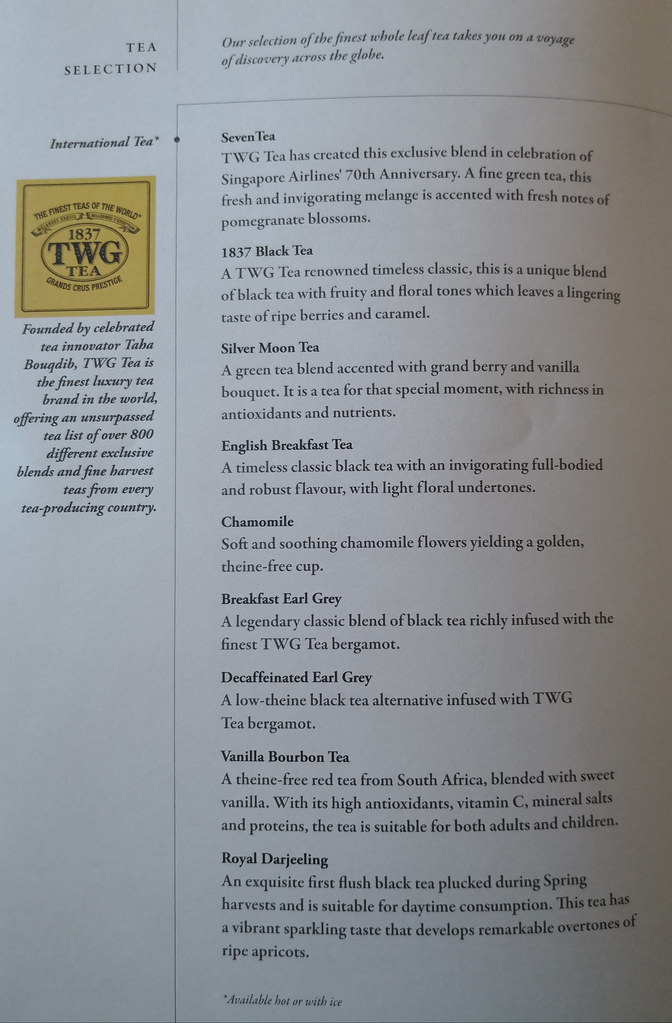 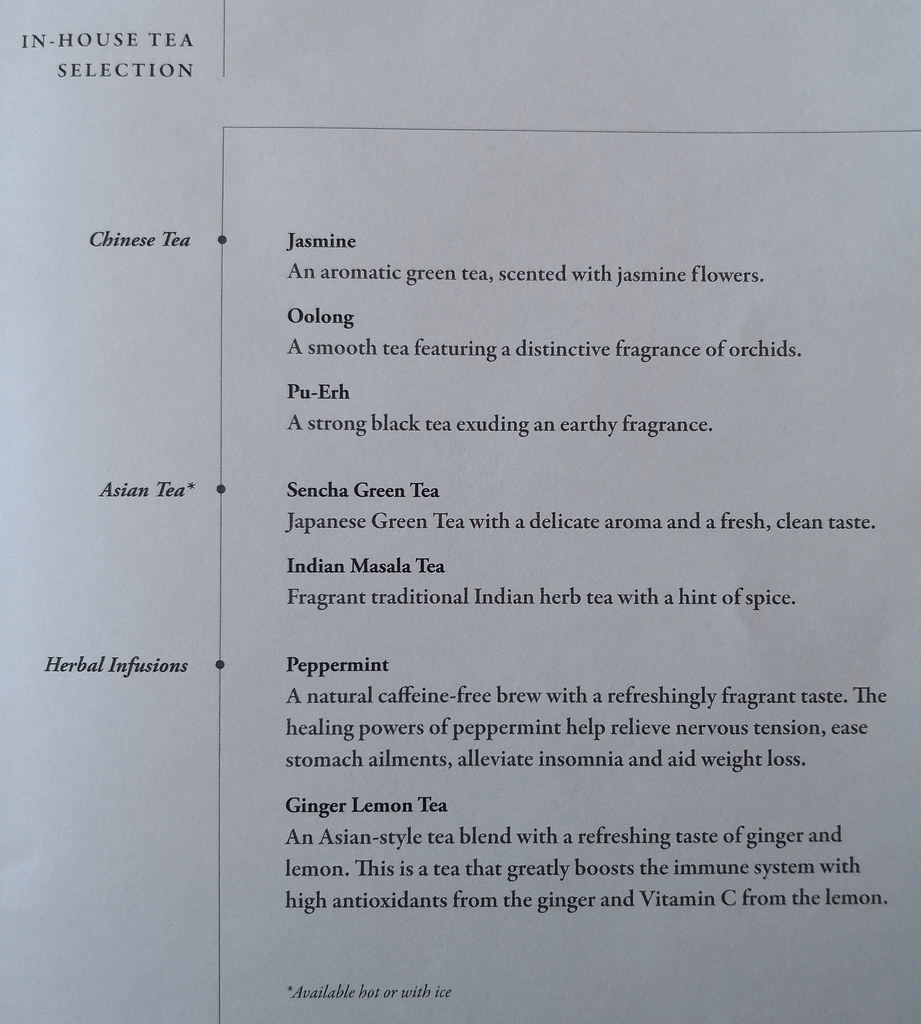 A queue for the runway meant we took a while before we were cleared for take off. That gave me plenty of time to check out the whole seat and enjoy the seat in its normal mode. The limited recline of these seats does mean it is not the best to relax in while the plane was on the ground, as they needed to be deployed to become a lie-flat bed. At this point, I should note that even though I was onboard the 777, I cannot help but wish I was on the A350 next to us.

Business class cabin was quite packed with only a couple of empty seats around when we pulled back and head to the runway. After take off I asked if I could move to the bulkhead seat as it was empty and requested for the bed to be made. A crew member did warn me that it is close to the galley and could be noisy since they do have passengers requesting meal service after take-off.

The reason I asked for the bulkhead seat was that it was a coveted seat due to more space for the leg while sleeping.A blanket was provided after the seat was converted to a bed.

The lavatories can be occupied quite fast once the seat belts sign was turned off, since there was some time between boarding and take-off. As such I made it a point to head to the lavatories to freshen up while waiting for the seat to be converted to a bed. On the Business Class front lavatories, Miller Harris branded fragrances and lotion was provided on the side, with a perfumed spray and mouthwash. Towels and tissue was dispensed from above the amenities. With a well maintained lavatory, I was content with changing and cleaning up inside.

Back on my seat, I checked out the entertainment controls located underneath the armrests. This is nearly similar to that in Economy Class making it intuitive to use. The other controls for the seats when in the sitting mode are located on the side of the seat.

Warm mixed nuts was served at night with beverage service and I had the midsummer breeze mocktail. There would be no satay service that is a signature of Singapore Airlines for this late flight.

Started watching the HK movie ‘Chasing the Dragon’ while munching on the nuts. While this certainly delayed my sleep, I did enjoy a bit of snack and movie before my nightcap. After that I decided to get some sleep and asked for a pair of eyeshades. At this point the crew actually closed the curtains and I really appreciated the consideration for passengers.

I managed to fall asleep easily as the cabin was cool and conducive. I would probably have fallen asleep all the way had it not been for the wake up call by the stewardess to inform me of the meal service.

After the wake-up nudge from the stewardess, I was passed some hot towel was along with a choice of juices. Even in the half-awake state, I was particularly impressed with the freshly-squeezed orange juice, even if it was from the bottle.

When I got my bearings back, I switched the bed back to the seat mode before the crew helped me to prepare the table. She came back later to setup the table cloth. From there on, it is the start of the only meal service for this ‘sleeper service’. 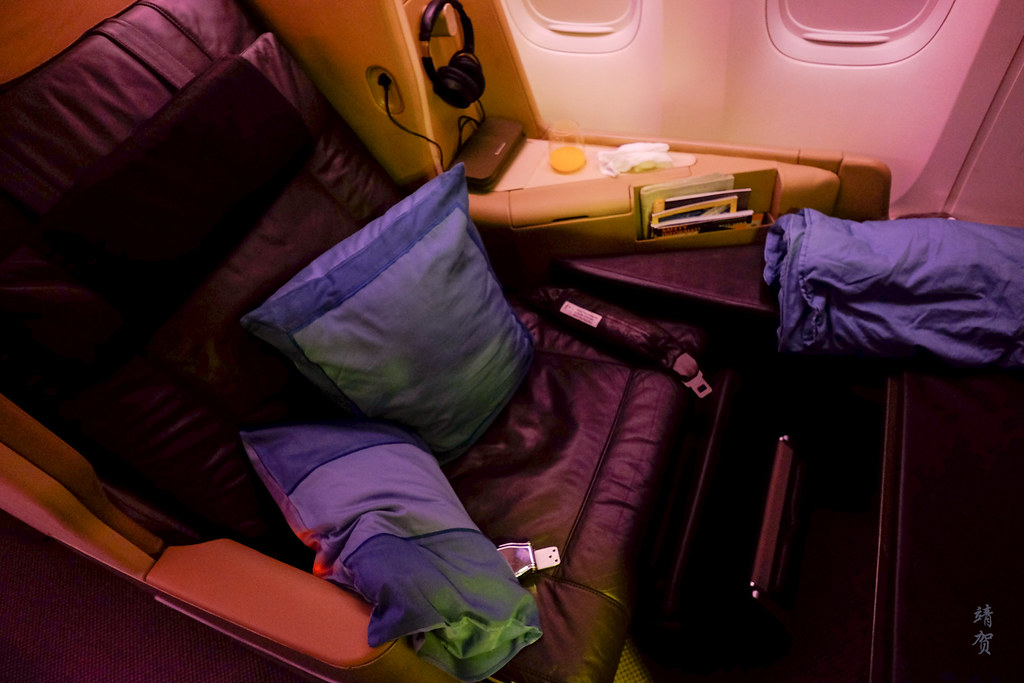 A glass of water was placed along with a cup of Oolong tea that I requested. I also ordered a cup of cappuccino but the turbulence after the Japanese set was presented meant hot beverage service was suspended.

One reason for ordering the Japanese set is that it is unique for routes to Japan. However, as a ‘sleeper service’ the Hanakoireki meal is slightly reduced with just one boxed meal.

Inside the lacquered box, there was an array of small bite-sized dishes with the largest containers reserved for the rice with seaweed and sesame, and the grilled yellowtail fish with teriyaki sauce. The other side dishes were a stuffed tofu with minced chicken, plain Japanese omelette, turnip salad and konbu with herring roe. The last dish was probably the most challenging in terms of taste for someone not used to Japanese cuisine. In addition, to the main box, there was a bowl of miso soup and a cup of green tea.

The meal did fill me up nicely as breakfast and the service continued well after with fresh towels being handed to me. The stewardess also asked if I would like anything else and I asked for a cup of cappuccino since I still have a long day ahead upon landing in Tokyo with a domestic flight to Sapporo and a bus ride to Niseko.

There was still ample time for me to enjoy the cup of cappuccino and finish up watching my movie that I left halfway before sleeping. Right around when our captain announced the start of our descent into Japan, the flight steward came around the cabin with a basket of mint candies that sure helped in freshening our breath after the night flight.

Opening the windows during our descent meant bathing the cabin with sunshine as it was morning time and the beautiful weather greeted us on our steady approach into Japan.

With the window view, I was once again treated to a view of the beaches and coastline into Narita. While the views were better when landing in Haneda considering the possibility of spotting the Tokyo skyline and sometimes views of Mount Fuji, the water and beach views here ain’t bad either, especially on a winter morning with blue skies.

As we landed in Tokyo Narita Airport, I was able to spot a Korean Air 747. Early this morning I managed to disembark the plane and make the trek to the immigration queue for which there was thankfully none early this morning. Even my luggage came out quick in the conveyor (gotta love Japanese efficacy!) so that gave me ample time to buy tickets for the bus to Haneda where I will take a domestic flight to Niseko.

For a red-eye flight I arrived surprisingly well rested and I found that the service on this flight beats my expectations. The details put in by the crew in advising me and providing as much assistance as possible shows how some Singapore Airlines crews are going the extra mile and that certainly makes it one of my best Business Class flights. As for the seats, I got lucky in getting the bulkhead seats which certainly afforded me more space to sleep without much obstruction.