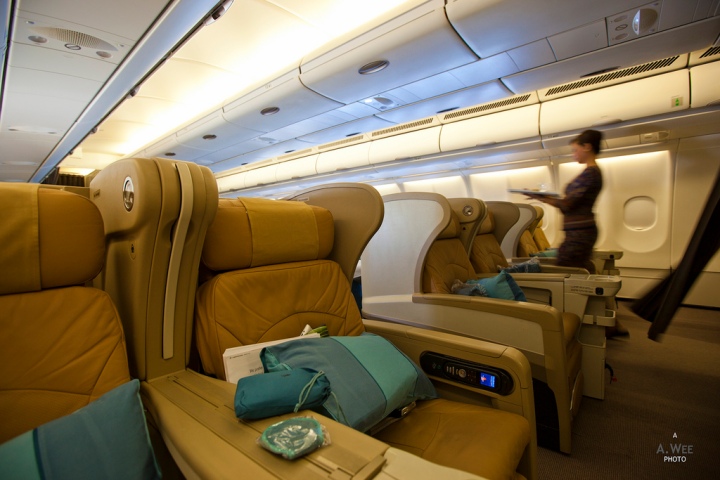 Welcome to yet another of my ski trip report. Though for this one, the focus would be more on the flights rather than the ski resorts as I went to ski with friends at Niseko. Having reviewed several of the ski areas in Hokkaido, I would not repeat them again. To get to Japan, I purchased a return flight onboard Singapore Airlines with a transit in Singapore during a travel fair. Flying on Business Class was around IDR 14 million (~$1000) and that was a reasonable fare for flying one of the best airlines in the world upfront. I would review the short flight onboard the A330 Business Class as it has been a while since I board this regional Business Class configuration and would make a good comparison to the recent Garuda Indonesia Business Class flight for the same route.

However this trip was slightly hectic in the start due to heavy traffic and I was so scared of missing the first flight which would mess up my plans. Fortunately, I arrived at the airport by 18:15; which is about 45 minutes before departure and I was still able to check my luggage through with the agent. Singapore Airlines certainly runs a very efficient operation in Jakarta even though it is out of the older Terminal 2.

Moderate queue at the security check meant I only had time for a bathroom break and some water at the Esplanade lounge, and having reviewed the lounge before, I didn’t feel the need to spend more time inside.

Boarding was orderly and started about 3 minutes after I was at the gate. This meant I was actually early for boarding. Once onboard, the stewardess helped me to store my winter jacket as I arrived at my seat. Welcome drinks of champagne, orange juice or apple and ginger ale was offered from the tray by the male steward.

Business class cabin was quite packed today with expats working in Jakarta, as the seat next to me was occupied by a rotund gentleman that kept to himself for the whole flight. Meal orders were taken in the cabin with Frequent flyer PPS members catered first.

The menu for this short flight seems to be more or less similar to what I had in past flights. 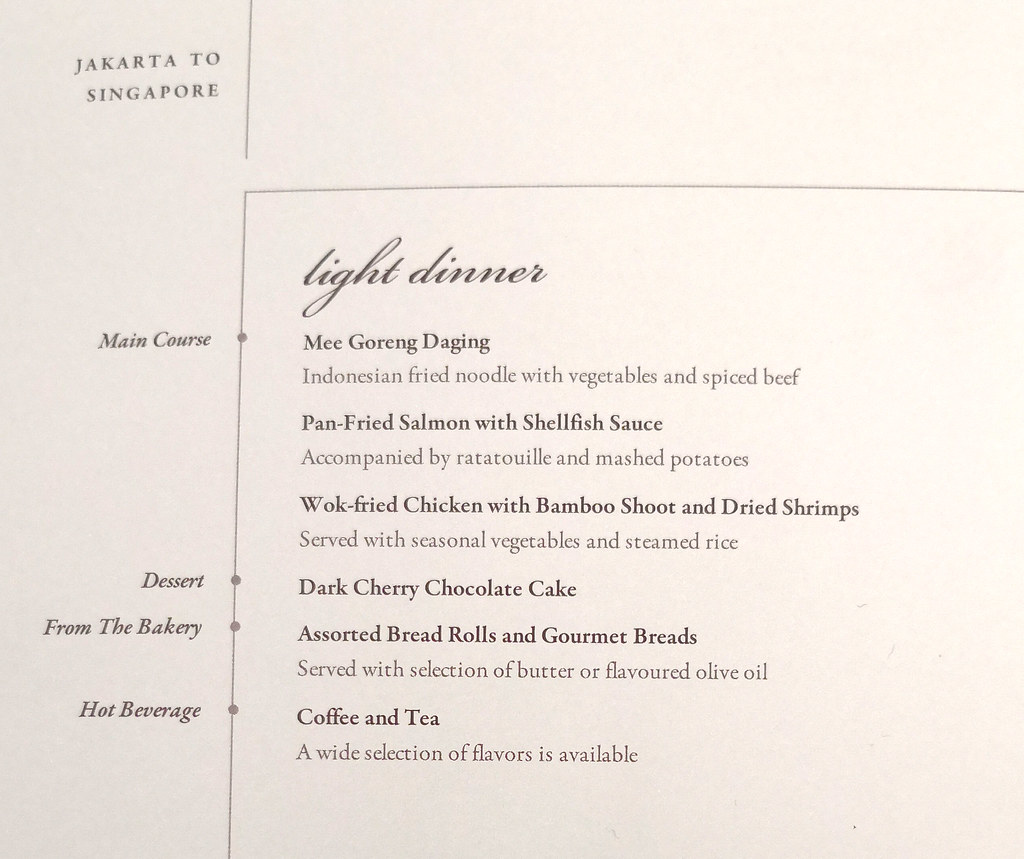 On the Business class seat, I noticed that Singapore Airlines have provided updated versions of their pillows and blanket. The pillow cover now features a houndstooth pattern that gives the cabin more elegance as it replaces the older jade green pillow covers. The blanket also seems more fluffy and these new onboard amenities does refresh the premium offerings somewhat considering the seats are showing some age now.

Hot towels are then distributed around the cabin along with offers for newspapers and magazines. The process was routine for Singapore Airlines and I applaud the crew for doing the service procedure to the detail.

Queue for take off meant we were delayed a bit. This is usual in Jakarta. Cabin lights were dimmed and the passing stewardess helped me to switch on my reading lights.

After take off a short announcement was made in English and Indonesian. Meal service began on the port-side (A,C and D seats) of the plane.

I had selected the Indonesian meal which was a fried noodle with beef and chilli slices giving it some spiciness. The flavour was a bit salty but I did finish the meal since I was hungry. Wine was offered with the main course while the dessert was a dark cherry chocolate cake which is more like a mousse really. The dessert was mediocre and I just took some bites at it.

Assortment of bread came later from the steward serving the cabin and I picked the garlic bread as usual.

Another hot towel was offered after the meal service and 2 hot towels for such a short flight is a bit of a luxury for sure. A short while later the captain came online to announce our position to Singapore and of our expected arrival around 21:55, slightly behind schedule.

Our flight continued for the next 20 minutes as we cruised past the Riau Islands approaching Changi from the South. Final preparations for landing was made roughly 10 minutes prior to touchdown with night lights of Bintan and Batam below.

For a flight filled with frequent flyers, there seems to be a rush to disembark even after landing uneventfully in Singapore. With a transit in Singapore, I was not in a hurry. This flight like many others between Jakarta and Singapore I have flown on Singapore Airlines goes to show why many Indonesian flyers still enjoy flying with SQ since they are really competent in the services. Moreover the A330 is in a clean condition with updated amenities that surely beats Garuda Indonesia’s Business Class on this same route with the same type of aircraft.