A bit of background on why I chose this resort for one of my ski trips for the 2016/2017 winter season. Squaw Valley recently merged with neighbouring Alpine Meadows to become one of the largest ski resorts around Lake Tahoe. They are part of the Mountain Collective, where I had purchased a pass from previously but I never got to try skiing at this resort. Thus I decided to give it a try this time around, considering it was close to San Francisco, a city that I enjoy visiting while in the United States. The bonus was that Squaw Valley used to host the Winter Olympics in 1960, and thus far all the resorts that have hosted the Olympics have not disappointed me in providing a memorable ski vacation!

As mentioned, the resort proper is located near Tahoe City in the northern part of Lake Tahoe, though it is not located on the shores of Lake Tahoe directly, unlike the ski resort of Heavenly. Most visitors to Squaw Valley would arrive via driving from the north through Donner Pass. There are regularly scheduled shuttles from the Reno Airport in neighbouring state of Nevada, though I rented a car from San Francisco Airport and spent the night at Roseville near Sacramento before driving to the resort in the morning.

Driving times usually take around 2 hours and 20 minutes from Sacramento and about 3 hours and 30 minutes from San Francisco, though expect some traffic when it snows or during the peak holiday season. Most of the time, snow chains are not required, as I did not equip my rental car with one during this visit though I would advise drivers who are using a 2-wheel drive car to bring one along since the road can get icy at certain sections.

In the larger village base area, Squaw Valley has one major gondola called the Gold Coast Funitel departing from the main central plaza in the centre of the village and close to the main parking lot. The base of the quad chairlift KT-22 Express and Exhibition is also located beside the Funitel station, along with the triple Red Dog chairlift that allows access towards the Squaw Creek area. From the base area at the back of the Squaw Valley Lodge and a slight trek from the main village base, a 4 seater chairlift called Squaw One Express leads to the base of Siberia Express. There is also a scenic aerial tram with its own station that caters to both visitors and skiers bringing them up to the High Camp area at 2,500m high.

From the mid-mountain area, skiers have a lot more chairlifts to bring them further up. A total of 3 different 6-pack chairlifts, namely Headwall, Siberia, Gold Coast and Big Blue Express brings skiers up to the summit of the mountain ridge. The first 2 has mainly expert terrains while the Big Blue Express offers plenty of terrain for beginners and intermediates. And then there is a small 3-seat Emigrant chairlift that leads to the top of Emigrant face.

On the back side of the mountain, skiers could use the 6-seater Shirley Lake Express and the triple Granite Chief chairlift to experience off-piste areas.

Squaw Valley advertises its Tahoe Super 4 Pack for $369-389 (depending on when you purchase them) and it can be used at both Squaw Valley and Alpine Meadows, while a day ticket costs $124. Thus expect to pay anywhere between $90-$120 for a day of skiing here, which is somewhat expensive when some larger ski resorts charge around the same rate.

If you’re new to skiing and snowboarding Squaw Valley has an introductory area called SnoVentures and it is located a bit of a trek from the Gold Coast Funitel base though it is served by shuttles from the Members’ Locker Room.

Alternatively, the resort has an area for easy green runs that is easily accessed via the aerial tram. The short double chair Mountain Meadow and triple chair Bailey’s Beach has a couple of green runs for beginners to try out the sport. Otherwise the blue runs that leads all the way to the base of Big Blue Express is pretty mild and easy for beginners progressing into intermediates.

Blue runs are quite good here and on the Squaw Creek side, the leisurely Lakeview run leads back to the Resort at Squaw Creek while Champs-Elysees leads to the base of the Gold Coast Funitel. The ski trails leading back to the village from the base of Siberia Express are also marked as blue with Mountain Run leading back to Home Run and Sunnyside. While they are marked for intermediate, the crowds and mess at the end of the day heading down the mountains does not make it suitable for those who are not confident enough or too tired to ski all the way down. 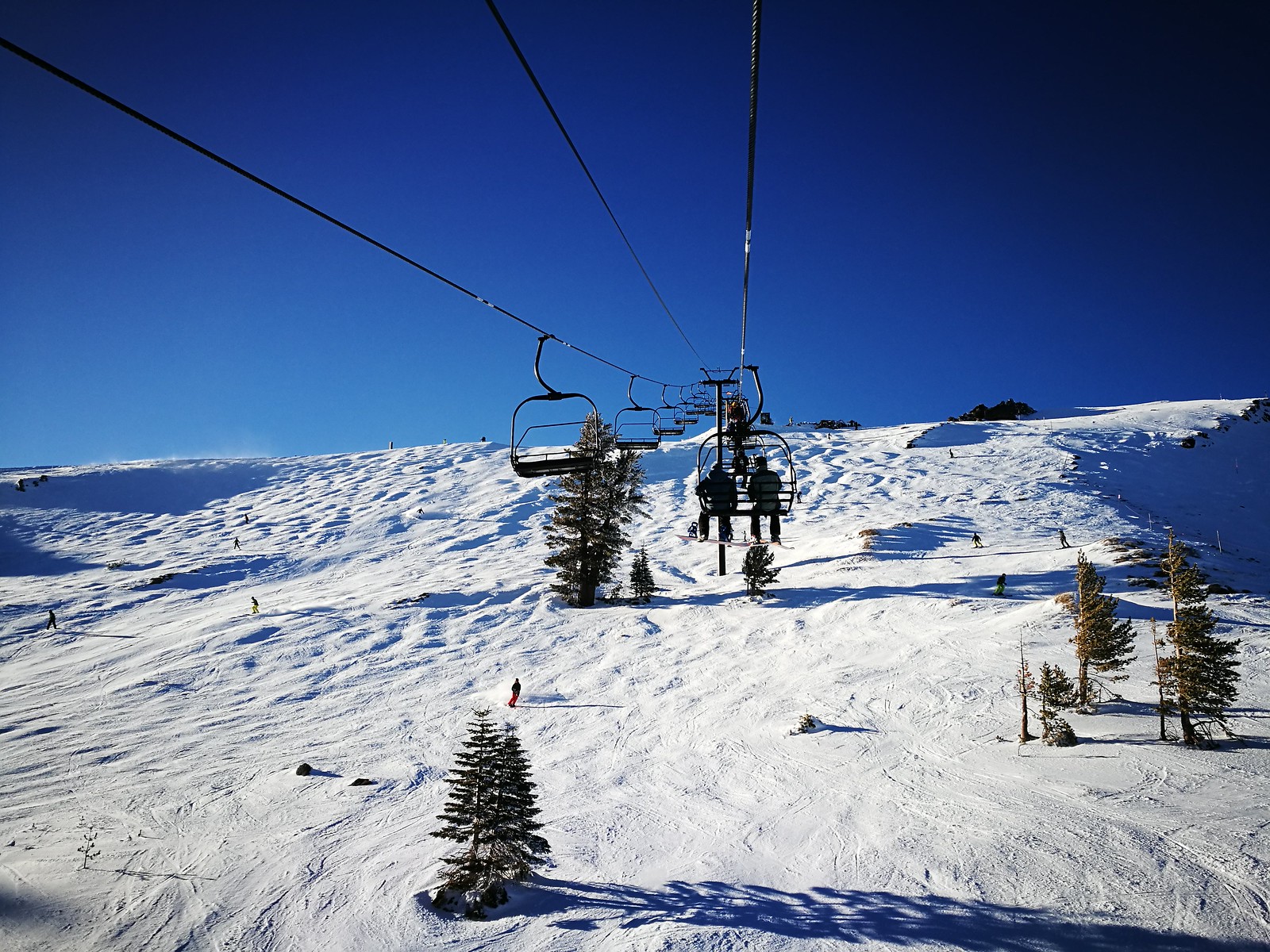 For a well known ski resort, the blue runs are quite limited especially when staying for a few days, thus that means skiers who do not enjoy going on repeated runs might get tired easily. In addition the runs are quite short and it feels like you just had some fun before reaching the base of the chairlift again.

On the other hand, I see this resort geared particularly for more advanced skiers and snowboarders. There are plenty of black diamond trails from the chairlifts in the upper half of the mountain. KT-22 is especially a famous chairlift as it has been voted as the best chairlift in North America, bringing skiers to the top with chutes and steep runs from the summit to the base. Unfortunately, it was yet to open when I visit which might mean I have to plan another visit here again in the future.

Granite Chief chairlift from the Shiirley Lake area is another area where experts can hone their skills or simply have fun going down the bowls, and in between the trees. There are even areas where skiers can hike a bit to search for fresh powder. Though in this particular season, the snowfall has made for an epic season in Squaw Valley so far. 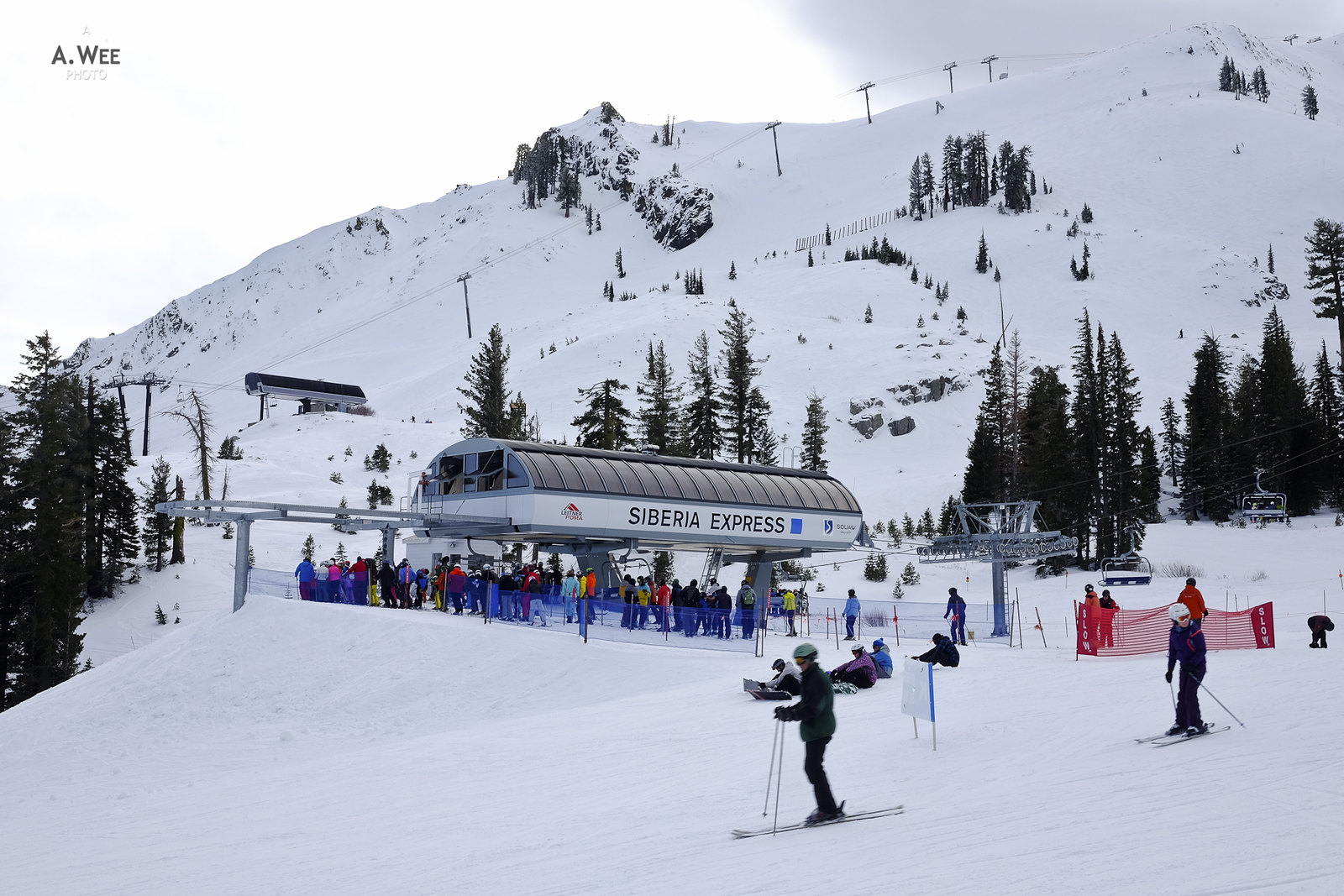 Terrain parks in Squaw Valley does not seem to be heavily advertised and it is limited to around the beginner areas. The best access is probably via Big Blue Express and the Aerial tram. With other natural terrains, I can see why terrain parks are not that big of a deal here. For example, there are natural half pipes below the Big Blue Express chairlift that should offer fun even for beginner and intermediate skiers and riders.

Other spots to dine while on top of the mountain would be found in the High Camp area at the top of the Aerial Tram station which should have less crowds. There is a sit-down restaurant called The Terrace with a spectacular view to boot when dining in as well as a cafe meant for grab and go salads and wraps. For other quick stops to have lunch, there is also a Starbucks and a Funi’s Marketplace cafe at right off the Gold Coast Funitel to grab coffee, tea and muffins.

The Arc in Gold Coast is not only the most convenient for seasoned skiers and snowboarders, it probably has the most variety of food ranging from Asian style bowls common in the Bay Area to American classic dishes like Burgers, Pizzas and Chilli Fries. Really just good old staples when skiing in North America, with prices ranging from $10-$15 for mains like sausages, pizzas and burgers or around $9 for small bites like fries and soups. These prices are average for ski resorts and really about the same to having a meal at the village.

Other than the usual diner fare, there are wraps, salads and quick meals to go from the cafes and Starbucks places on the mountain and in the village. Another spot I would favour for lunch is MTN Roots Cafe at the village which have a mix of creative soups, salads and tapas like short rib waffle sliders and beer battered cauliflower. There is also the Fireside Pizza in the village dishing out pear and gorgonzola pizzas. Aside from the meals at the mountain, I find Squaw Valley tends to serve some good Californian fare that combines a mix of the state’s agricultural produce and adds a creative touch to it as a result of the diverse population.

Right by the village, Squaw Valley Lodge is a true ski-in/ski-out property with the Squaw One Express located just steps away from the hotel. Another ski-in/ski-out accommodation is the more luxurious and larger Resort at Squaw Creek that is just adjacent to the lone Squaw Creek chairlift in the other side of the resort.

As expected, the village hosts the rest of the lodging options for skiers looking to spend the night near the ski lifts. There are limited choices though, with the PlumpJack Inn being probably the best rated lodge and its on-site restaurant, the PlumpJack Cafe offers a more upmarket dining experience. Families would be well catered to with the large studios and apartment style accommodations at Squaw Valley Lodge and the Village at Squaw Valley. Otherwise there are a few independent lodges a bit of a drive around the resort. And if you do not need to be near the resort or are exploring Lake Tahoe, I suggest staying at Tahoe City instead where you can be close to the grocery stores and more restaurant options at night.

Due to the small resort size and the lack of on-mountain lodges, most aprés activities are found at the base village. There are a couple of pubs and pizza places right at the village below the KT-22 chairlift or across from the aerial tram. For a ski resort, the aprés scene lacks vitality and that could be due to the larger number of families staying overnight for the holiday season. I believe there might be a more vibrant aprés scene in Tahoe City or at other ski resorts like Heavenly around Lake Tahoe.

As part of an after-ski activity, visitors should also note that many skiers leave shortly after the resort closes and thus the shops and boutiques close quite early in the evening after the last lift stops operating. Do expect half of the stores to close around 6pm in the evening. Since the resort has limited night skiing, skiers probably should find a resort with a hot tub to enjoy the evening.

For this visit, I stayed several days and experienced powder days when it was dumping snow. Though it was too early in the season which meant the snow base was inadequate resulting in several chairlifts still not being fully operational. Squaw Valley did have an extremely good season so far though will record-breaking amounts of snow falling on the area for this season, and they would be a great resort this year to visit before the whole winter season ends.

While I did have one of my best skiing days in the resort due to skiing in fresh snow, this resort lacks the big resort feel. For what it charges for lift tickets, it is of less value, and if you ever visit Squaw Valley, I would advise spending some time in their neighbouring Alpine Meadows resort (a review of which is to follow) which I found offer a more satisfying experience overall.