With the lounge being nothing special, I made my way to the boarding gates at the time indicated on the boarding pass. The flight was departing in one of those amalgamated boarding gates where flights on Singapore Airlines A380 usually depart from. Thus there are multiple security check lanes and no queues at all. That meant while I was through the security in no time, the flight was also boarding on time. It seems there was an early boarding as well, and what made it more interesting was that while the flight is tagged as an MU flight which indicates China Eastern as the operating carrier, the airplane was in Shanghai Airlines livery. Though it must be stated that the Shanghai Airlines is a subsidiary of China Eastern.

Boarding from these gates meant entering the cabin from the front for Business Class passengers. China Eastern uses the same Business Class seats as Air China on these A330s which feature forward facing lie flat seats in a 2-2-2 configuration. As I boarded, there was already someone occupying the seat 8A, so the crew asked if I might want to be seated at 6D instead which is the bulkhead row. I took her up on the offer since I wanted to sleep without being interrupted. When I got settled on the seat, the crew came around with a tray of orange juice and water, and I picked the latter. In addition, a hot towel was also served on a ceramic plate.

The cabin is suitable for a red-eye flight as it does have a nice spacious seat that reclines into a bed. I had been on Air China’s Business Class which features the same seat so the hardware was actually quite good. These are also the same seats found on LOT Polish’s 787.

Aside from the welcome drink, there was also a pillow and a wrapped blanket on the seat. By the ottoman, there was a slipper in a re-usable shoe bag. I like the way these slippers are presented as I could have a use for these shoe bags since I like to bring along a running shoe or flip flops for those vacation.

While waiting for boarding to be completed, the cabin crew passed around the menus for this flight.

What was unique here was that the purser for the flight would take your order and retrieve the menu as the menu lists out the various choices for all the Singapore to Shanghai flights. For this particular flight, only breakfast would be served prior to arrival and guests are asked if they would like to be woken up for service. I know some of the passengers declined this meal service. The menu also lists out the selections in 3 different sets, with colour coding to represent the sets. On the 1st, 4th, 7th and 10th month, it was coded red, the 2nd, 5th, 8th, and 11th month it was coded orange and the 3rd, 6th, 9th and 12th month it would be coded blue. It made it quite confusing for first time passengers though I did eventually find the correct page to look at. For brevity, I would only post the menu for this particular flight and readers interested to know the full menu could find photos of them at my Flickr album for this flight. The menu for this flight was as follow: 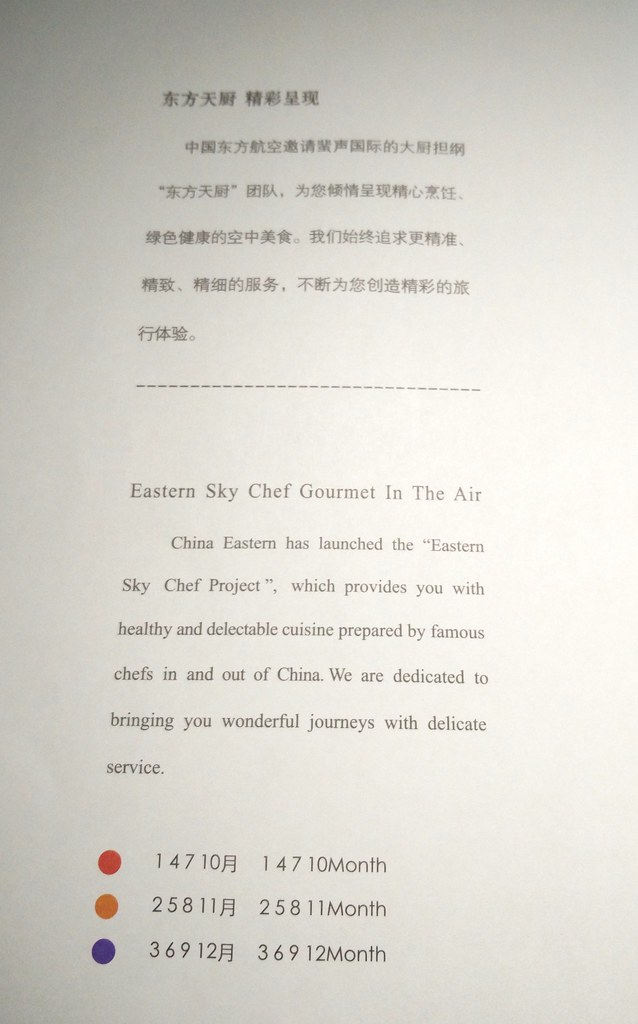 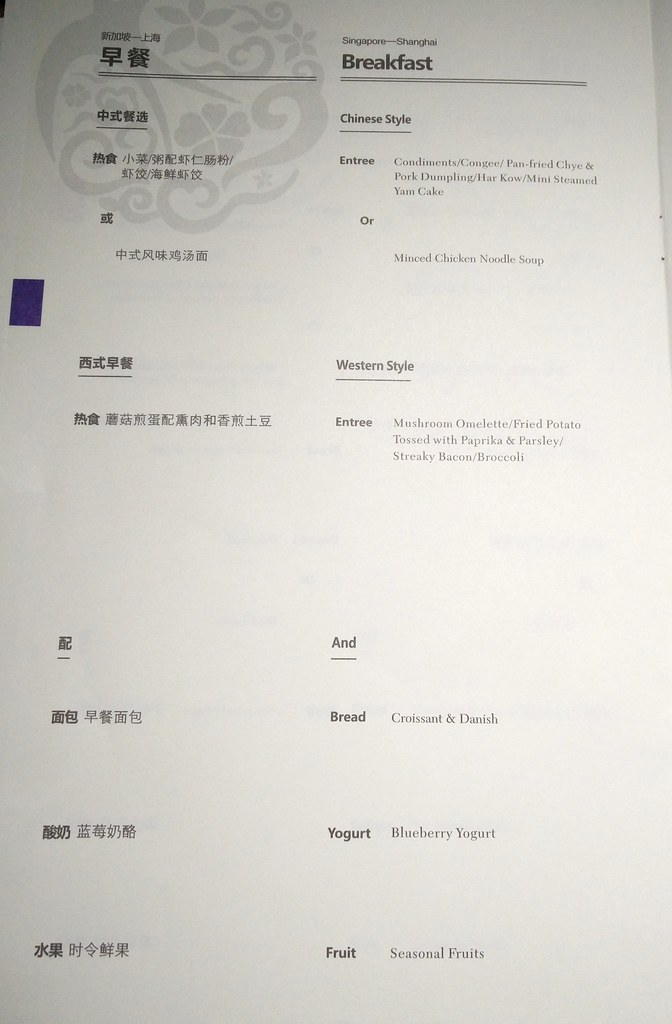 There was also a separate beverage menu, and while it may look impressive, I was only drinking tea and water for this flight as I refrained from alcohol since I had some matters to attend to in Shanghai for the day. The beverage menu was as follow: 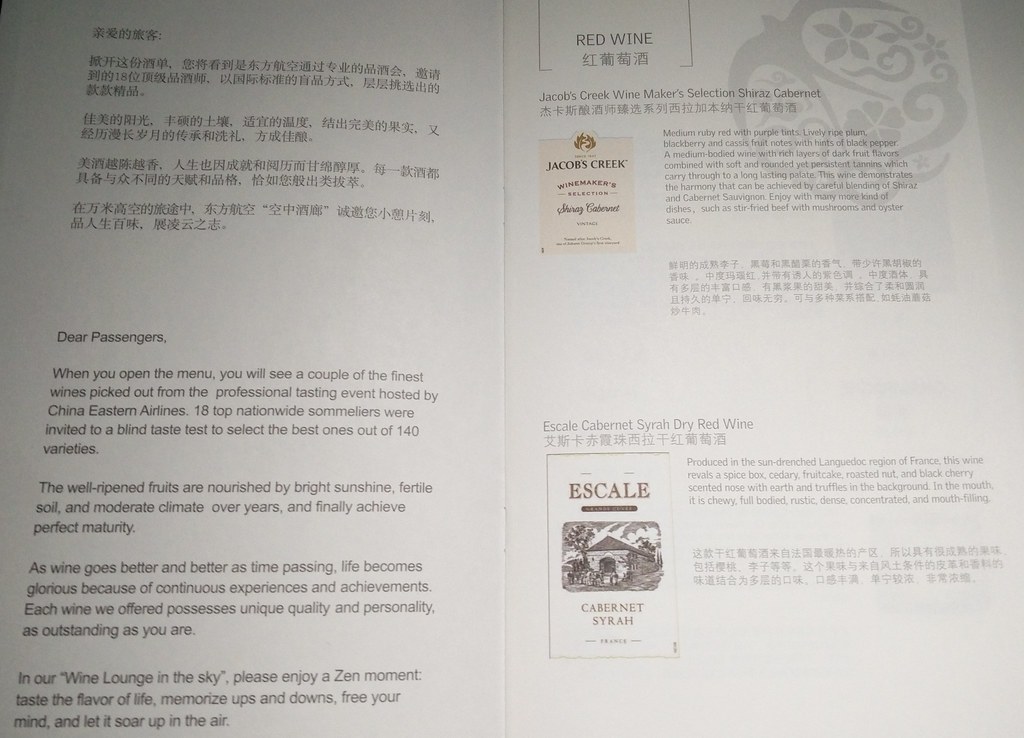 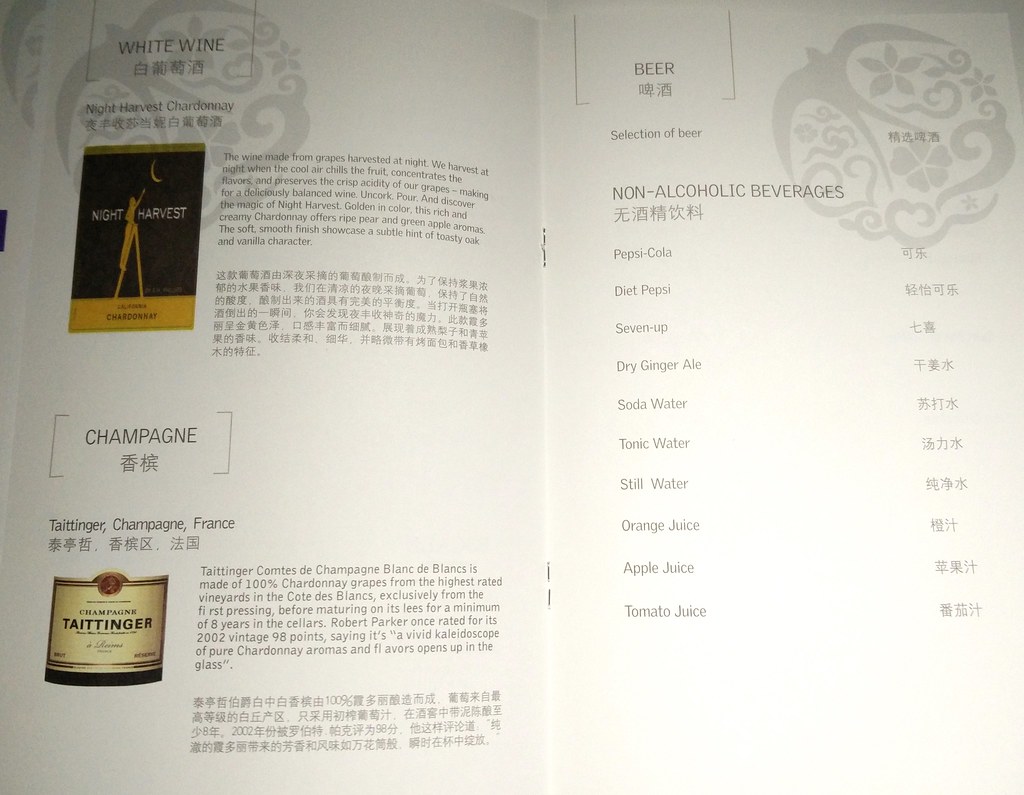 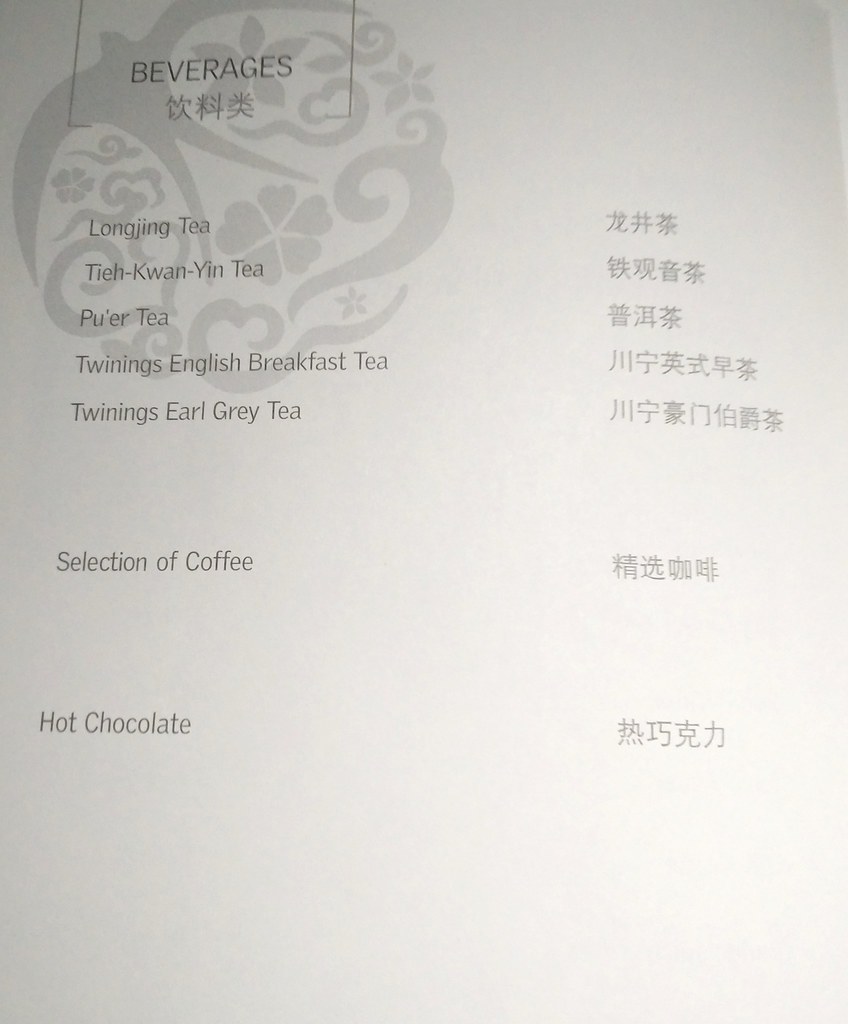 Boarding did not take any longer than it needed to be as we pulled back early and made a short taxi to the runway for take-off. The flight tonight would be an extremely short one according to the captain and that meant less time to sleep. After we reached cruising altitude, the crew came around with eye shades for passengers, though I was surprised they did not pass this around earlier as some passengers were already asleep at this time.

The crew also passed immigration and customs form for China during this time while I started to check out the entertainment selection.

As I wanted to watch something before sleeping, I asked the crew for some tea and snacks. I was given a packet of nuts along with the tea. While not exactly premium, it was acceptable for me. On a side note, passengers should not really expect much snacks for the late departure out of Singapore as the crew expects passengers to just go to sleep immediately. The crew did come around the cabin with a bottle of water for every Business Class passenger.

Not long after that I started to feel sleepy and I reclined the seat all the way down. There are no amenity kit or pyjama or socks provided even on this overnight flight either. After all this is not First Class. That left me with just one pillow and a blanket to make myself comfortable.

It was good to have at least 3 hours of sleep on the bed as the crew woke me up for the breakfast service. To refresh passengers, there was another hot towel service and I was asked if I would like tea or coffee. I went with more tea since on a Chinese carrier, tea is the safer choice.

While the amenities might be lacking, the breakfast served was substantial and nicely presented. There was a small yogurt on the side along with a fruit bowl. As I picked the Chinese entrée, it was a bowl of minced chicken noodle with soup. The bowl of noodle was warm and tasty so I did finish it all up. There was also a croissant that I got from the crew who offered it to passengers. Surprisingly the croissant was warm and flaky, and that made for a nice satisfying meal.

After the meal, I got another bottle of water from the crew as I finished the one provided. I also asked for a pen to fill in the customs form, before relaxing for the rest of the journey into Shanghai by continuing the inflight movie from where I left off.

The captain was not that far off when he said we would be arriving early into Shanghai. I expect that it was nice weather that allowed that to happen and we landed into Shanghai Pudong nearly an hour in advance of schedule. There was a bit of taxi time into the terminal but the early arrival was not bad since it put us ahead of the other flights.

After disembarking from the flight, I made my way to the immigration though not without taking another photo of the plane. Just after I joined the moderately long queue, there was another bunch of passengers coming to join the queue. Because not much of the lanes were staffed by the customs officers at this time of the day, the moderately long queue still took about half an hour to clear. In fact the Chinese nationals queue cleared up by the time I reached the front of the line. That meant by the time I reached the luggage claim area, it was nearly empty as I picked my luggage from the carousel.

China Eastern further solidifies my view of the airline as being the weakest amongst China’s 3 largest airlines, the other being Air China and China Southern. I find Air China to be on par with China Southern and they are probably slightly better than United Airlines in terms of premium offerings, but China Eastern is more or less on par with United Airlines. And no airline should aim to be on par with United as that is a bad benchmark to be at. The lack of amenities like socks for an overnight flight is underwhelming, though fortunately the crew on this flight was friendly and tries to satisfy the passenger’s request. Though for the price of the return flight at $1,260 with taxes inclusive, it was slightly more expensive than Economy Class on Singapore Airlines and for that I cannot really complain much since it meets my needs for a lie-flat seat for that few hours of sleep. The timing of the flight also frees up the day for me to settle my business in the city.